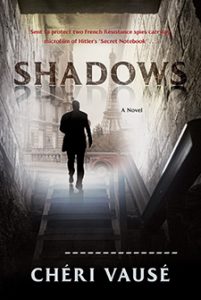 Shadows. There is insanity in keeping secrets. So Aiden “Mac” McManus, a young Navy Underwater Demolition Team leader, believes when he is sent by World War II’s Supreme Commander, General Eisenhower, to protect two French Résistance spies carrying microfilm of Hitler’s Secret Notebook. It contains all the formulas and processes for advanced weaponry created by Nazi scientists. But the mission goes horribly wrong. Twenty-two years later, in a time of social unrest and homegrown terrorism, history repeats itself. Mac is tasked to take on the same evil he faced during the war, leaving his wife Esther and their child behind. But when Esther herself is targeted, their enemies just might find out the hard way that the female of the species can be more deadly than the male.