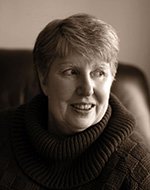 Devilish Doings in England’s Green and Pleasant Land — Susan Boulton, as in the song by the Police, was born in the ’50s and came into the world 200 yards from where Tolkien spent time thinking about hobbits 37 years before. Having loved to read since she was very young, Susan began to wonder if she could actually write a novel. Once she tried she found it addictive. She’s been writing stories, long and short, ever since.

Susan has lived all her life in rural Staffordshire and has a passion for the countryside, its history, its myths, and its legends, all of which influence her work. Her first novel, Oracle, is a steampunk fantasy of political intrigue. She’s also published numerous short stories, including “Jac” (Dark Fiction Spotlight, 2010), “The Giving of Adela” (Tales of the Sword,edited by Dorothy Davis), and “Death Won’t Be Cheated” (Malevolence: Tales from Beyond the Veil, edited by J. Scott-Marryat, 2014).

Married with two grown daughters, Susan now puts her overactive imagination (once the bane of her parents and teachers) to good use in her writing.

Hand of Glory was inspired by Susan’s combined interests in World War I (fueled by family stories of both her grandfathers), the many historical memorials throughout local villages, and a deep appreciation of the myths, folklore, and supernatural stories of her region. You can read more about her influences in the “Author’s Note” below. 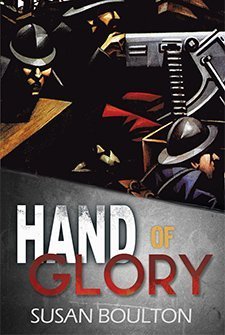 “And all that awake now be as the dead, for the dead man’s sake . . .” In Passchendaele near the end of the Great War, Captain Giles Hardy is trapped on barbed wire, wounded in mind and body, convinced he should be dead. But Giles’s true battle begins after he’s rescued and sent home. In the small town of Stafford, he struggles with terrifying visions of the atrocities he’s witnessed–and a recruit he served with.
The visions lead Giles to a man who exploits the grief of the bereaved with the help of a Hand of Glory, a mythical tool of thieves. A new friend, Agnes Reed, and the ghost of an old one, Corporal George Adams, aid Hardy in his investigation. Now he must catch the thief, destroy the hand, and lay to rest the men who will otherwise never leave the fields of Flanders.

Perhaps it was the snatches of conversations half overheard as a child that led me to study World War I poetry for my GSE exams at the age of 16. Perhaps it was the memorials in every village and town, some large bronze statues on large marble plinths. Perhaps it was a village hall in the village where I was born, built with donations and dedicated to the young men who never returned. All part of everyday life, a backdrop, yet a solid statement of grief that had stuck in every community.

However I gained an interest, it grew over the years. I knew I wanted to write a story about that time, but how? How to show the upheaval, the clash of the old and the new, the dying of old myths and the creation of new ones? Hand of Glory was born out of this desire, and as it began to be written it merged with my love of ghost stories, old myths, and legends from my part of the world. Those beliefs, though submerged beneath the modern world, have become stronger in many ways, changing and growing with each retelling and new generation.

Such is the myth of the Hand of Glory. I needed a supernatural element to bind my story together, a reason for my “ghosts” to return, and a driving force for my antagonist. While looking through one of the many books on English myths and legends that line my bookshelves, I came across a small paragraph about the Hand of Glory, which had been donated to the Whitby Museum in 1935. The article also made reference to the Ingoldsby Legends, a series of poems and stories by Richard Harris Barham under the pseudonym of Thomas Ingoldsby. The moment I read the Nurse’s Story, I knew I had found what I was looking for.