Stephen McGarry is an author from Dublin, Ireland. He has spent many years in Belgium where he explored the Continent’s links to Ireland. This led to his fascination with the story of the ‘forgotten’ Irish diaspora – fondly known as the ‘Wild Geese’ – who fought in many of the defining battles in the 18th century, and in the early 19th century under Napoleon. He is the author of Irish Brigades Abroad, chosen as one of The Irish Times Best Books of 2014, and has contributed widely on the subject in a variety of national magazines, journals and newspapers.

For many years, he aspired to write a novel set during the Napoleonic Wars, drawing inspiration from the likes of Bernard Cornwell’s, C.S. Forester ‘s and Patrick O’Brian’s Napoleonic novels. However, there were to be key differences. The book was to be written, not from the British, but from the French point of view, and he also wanted to vividly portray the fragility of the novel’s protagonist. This culminated in Napoleon’s Blackguards, his first foray into historical fiction.

He lives with his Belgian wife, three teenage children and dog, at the foot of the Dublin Mountains, where he writes, and enjoys long walks. 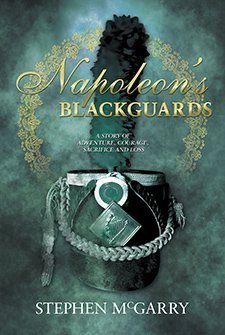 Spain 1808. A remarkable debut novel, Napoleon’s Blackguards introduces Captain James Ryan—brutally courageous, but haunted by the horrors of war. Wanted by the British for his part in the 1798 Irish Rebellion, he escapes to France and joins Napoleon’s Irish Legion. The Irish unit’s reputation as the most hard-fighting and ill-disciplined unit in the French Army has been hard-earned, for they comprise a motley crew of blackguards, deserters, and others escaping the long hand of the law, all led by a band of former Irish rebels.
Ryan’s Irish battalion deploys to Spain during the Peninsular War, a war that draws England into the conflict to oust the invading French from the Iberian Peninsula. When the British army arrives in Spain, they are faced with a much larger French force led by Napoleon himself, and are forced to retreat, fighting a desperate rearguard action to reach Corunna to ship them Dunkirk-style back to England.
An albino, Captain Darkford of the 4th Light Dragoons who murdered Ryan’s family, is among them. Ryan and his band of renegades play their favorite Irish ballads, as they pursue the evil Darkford. Ryan must have his revenge. Will he have time to catch his implacable enemy before the British slip away?
A cracking adventure story, meticulously researched and based on real events from the author of Irish Brigade’s Abroad, from the Wild Geese to the Napoleonic Wars (2013)
Napoleon’s Blackguards—poised to become one of the great war novels of the period—is a must-read for fans of Bernard Cornwell and Simon Scarrow. The book drips with the horrors of war, and contains, perhaps the most vivid and unflinchingly graphic depictions of war’s bloody effects written during the Napoleonic Wars.