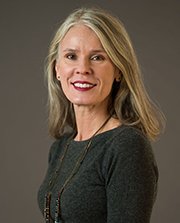 Filling the Gaps in Women’s History —   Sarah Kennedy was born in Indianapolis, Indiana, and lived in the Midwest until her early thirties, when she moved to Virginia to take a teaching position at a small liberal-arts college. With a Ph.D. in Renaissance poetry, she expected to spend her time as a scholar, but she soon discovered that the urge to write creatively was too strong to ignore—and writing countless academic articles too boring. After a great deal of soul-searching, Sarah returned to school at Vermont College, completed an M.F.A. in Poetry Writing, and accepted a position at Mary Baldwin University, where she currently teaches both literature and creative writing.

Although Sarah’s writing began with poetry, she found, after a summer spent in Aberystwyth, Wales, that her writing was taking a distinctively narrative turn. Her writing subjects changed, from the personal and lyrical to historical figures. Sarah has also had a long-standing interest in the history of faith and belief systems, and religious figures from the English mystic Julian of Norwich to the Irish “changeling” Bridget Boland also showed up in her poems. For this work, she was awarded an NEA grant and a Virginia Commission for the Arts fellowship, as well as an NEH grant to study the performance of Shakespeare’s plays at the Globe Theatre in London.

Seven books of poetry later, Sarah brought her knowledge of religious and cultural events in Tudor England and her poetic skills in description to fiction. Her lines finally made it to the right-hand margin, and she began to write novels. The first, The Altarpiece, features a young novice, Catherine Havens, who finds herself and her life threatened by Henry VIII’s break from Rome, and the series follows Catherine as she struggles with the upheavals and new opportunities of the English Reformation. Everything has now come together, and in The Cross and the Crown series, Sarah brings sixteenth-century England to life.

Sarah Kennedy lives with her husband, the poet R. T. Smith, in rural Rockbridge County, Virginia, a few miles from Lexington. When she’s not researching, teaching, or working on her next book, Sarah spends her time fulfilling the desires of their spoiled hound dog Gypsy. She also gardens and watches the birds—and sometimes bears—that visit their yard. 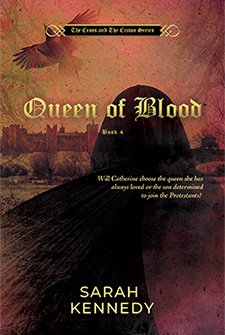 The Cross and The Crown Book 4. Queen of Blood, Book Four of the Cross and the Crown series, continues the story of Catherine Havens, a former nun in Tudor England. It is now 1553, and Mary Tudor has just been crowned queen of England. Still a Roman Catholic, Mary seeks to return England to its former religion, and Catherine hopes that the country will be at peace under the daughter of Henry VIII. But rebellion is brewing around Thomas Wyatt, the son of a Tudor courtier, and when Catherine’s estranged son suddenly returns from Wittenberg amid circulating rumours about overthrowing the new monarch, Catherine finds herself having to choose between the queen she has always loved and the son who seems determined to join the Protestants who seek to usurp her throne. 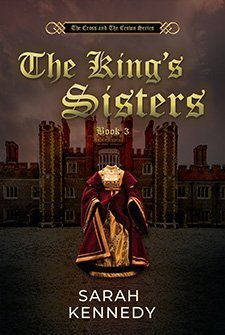 The Cross and The Crown Book 3. The King’s Sisters continues the story of Catherine Havens. It’s now 1542, and another queen, Catherine Howard, has been beheaded for adultery. Although young Prince Edward is growing, and the line of Tudor succession seems secure, the king falls into a deep melancholy and questions the faith and loyalty of those around him. Catherine has found herself in a unique position as a married former nun. Now she is a wealthy widow. She has two children, a boy who has successfully joined the young prince’s household and a daughter who lives with her at Richmond Palace, home to Henry’s cast-off fourth wife, Anne of Cleves, now designated “The King’s Beloved Sister.” Catherine also enjoys the attentions of widower Benjamin Davies, and in the festive court atmosphere, she has furtively indulged her passion for him. But England has changed again. Anne of Cleves hopes for reinstatement as queen—until questions arise about the finances of the houses she keeps. Catherine, as one of the king’s “reformed sisters,” is singled out, just as she realizes that she is carrying a third child. The King’s Sisters explores the Tudor court under an aging Henry VIII. He now has a son and heir, but his two daughters remain players in the political intrigues. The Cross and the Crown series follows the very private Catherine as she is thrust into the scheming. She is skilled enough to serve a former queen, but this may be the very quality that endangers her future.

“Sarah Kennedy opens magical windows into the world of Tudor’s England and brings it to life in vibrant colors and unforgettable reverberations. She reinvents the genre of historical fiction of that period giving voice to women of all ages, social classes, and economic standing. She writes with astounding detail of material culture and deft psychological insight about the experiences of women from the royal sisters to maids and confidants amidst whom the feisty protagonist Catherine Haven sparkles in the full richness of her empowered self, in the delicious shades of her moods, intelligence, warm motherhood and sensuality. This third novel in the series soars to new heights and we follow the heroine breathlessly on her suspenseful, sometimes reckless, always riveting journey.” — Domnica Radulescu, author of Train to Trieste and Black Sea Twilight 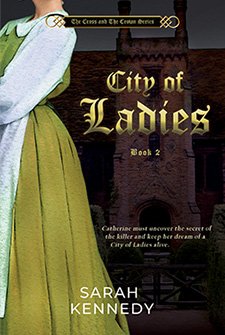 The Cross and The Crown Book 2. It’s midwinter in 1539, and Catherine Havens Overton has just given birth to her second child, a daughter. The convent in which she was raised is now part of the Overton lands, and Catherine’s husband William owns the properties that once belonged to her mother’s family. With a son, Robert, and her new daughter, Veronica, Catherine’s life as the mistress of a great household should be complete.
Henry VIII’s England has not been kind to many of the evicted members of religious houses, and Catherine has gathered about her a group of former nuns in hopes of providing them a chance to serve in the village of Havenston, her City of Ladies.
Catherine’s own past haunts her. Her husband suspects that Catherine’s son is not his child, and his ambitions lie with service at court. Then the women of Overton House begin to disappear, and though one of them is found brutally murdered nearby, William forces Catherine to go to Hatfield House, where the young Elizabeth Tudor lives, to improve the family’s standing—and to ensure, for her own safety, that she is as far away from connections to her old convent as possible.
Reluctantly, Catherine obeys, only to find herself serving not only the Protestant Elizabeth but also the shamed Catholic Mary Tudor. As the murders in Yorkshire mount up and her loyalty to the Tudor sisters grows more complicated, Catherine must uncover the secret of the killer and keep her dream of a City of Ladies alive. 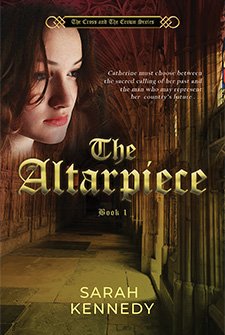 The Cross and The Crown Book 1.  It is 1535, and in the tumultuous years of King Henry VIII’s break from Rome, the religious houses of England are being seized by force. Twenty-year-old Catherine Havens is a foundling and the adopted daughter of the prioress of the Priory of Mount Grace in a small Yorkshire village. Catherine, like her adoptive mother, has a gift for healing, and she is widely sought and admired for her knowledge. However, the king’s divorce dashes Catherine’s hopes for a place at court, and she reluctantly takes the veil. When the priory’s costly altarpiece goes missing, Catherine and her friend Ann Smith find themselves under increased suspicion. King Henry VIII’s soldiers have not had their fill of destruction, and when they return to Mount Grace to destroy the priory, Catherine must choose between the sacred calling of her past and the man who may represent her country’s future.

“The historical record is rarely a democratic one. Infrequently do the voices of those deemed subservient by and to the ruling elites speak from the past…Yet, in her meticulously researched, deftly written, and effectively plotted novel, The Altarpiece—the first book of The Cross and the Crown series—Sarah Kennedy gives both voice and echo to the women at the Priory of Mount Grace in Yorkshire, England.” — Southern Humanities Review