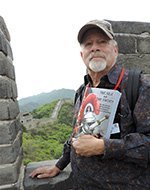 Passions and Duty Collide — After graduating from California State University at Long Beach in 1965, Ron Singerton joined the US Army Security Agency and spent his overseas time in Asia. The following twenty-five years were devoted to teaching history and art in Southern California high schools, where he developed a particular love for writing and historical research.

During the early 1980s, Singerton authored a series, Moments in History, of some thirty minibooks on legendary people and events ranging from Columbus to the moon landing. The books were adopted as supplementary teaching material for the State of California and approved by the Los Angeles school board as a teaching aid. Published by Santillana, the original editions are considered collector’s items.

An avid horseman and saber fencer with a special interest in the American Civil War, Singerton “heard the bugle and the sound of the drums” and became a reenactor riding with the Union cavalry in dozens of engagements from California to Gettysburg, Pennsylvania.

Always interested in an exciting but obscure story, Singerton conducted historical research that meandered from the nineteenth and twentieth centuries back to the ancient world. “Technology of the past often appears elementary to us,” he explains. “The emotions do not.” For him the thoughts of peoples long past, as well as civilizations now little more than ruins, still evolve into a pageant of love, intrigue, and dire conflict—nothing less than a shadowed mirror of our own world. Through the writings of Plutarch, Pliny, and Julius Caesar, Singerton uncovered an epic event that would take him from Rome in the last days of the Republic to the Great Wall of China. After years of research the tale became the foundation of two novels: Villa of Deceit and its sequel, The Silk and the Sword has just been released in 2016.

Ron Singerton is also a professional artist, working in glass, stone, paint, and bronze. He and his wife, Darla, own and create works for their art gallery, Singerton Fine Arts, in Idyllwild, California. 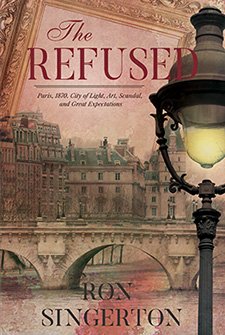 Paris! 1861, City of light, art, scandal and great expectations, where extreme wealth rubs against raging poverty, with insurrection roiling beneath the surface. In the United States, the war of 1861-65 destroys families and communities. Three survivors decide to leave behind the ruins of their former lives. Union cavalryman and aspiring artist Jack Volant, a survivor of Gettysburg, sails to Paris to pursue his artistic vision. Charlotte Stuart, herself a talented sculptress, and her half-brother Jerome turn their backs on a scorched plantation and intractable prejudice. Charlotte becomes a favorite of Empress Eugenie, wife of Emperor Louie Napoleon and a renowned patron of artists, while Jerome joins forces with revolutionaries. Eventually, Charlotte is able to introduce Jack to Les Refusés—the French Impressionists whose avant garde styles are deemed unacceptable by French jurists. For a little while, Jack is able to forget the horrors of war, painting alongside Monet, Pissarro, Cézanne, Degas, and Manet. Elsewhere in the city, Jack’s disreputable brother Marcel profits from the sale of Egyptian artifacts of dubious origin. But in 1870, everything changes. A spirit of revolution sweeps through the city like a wild fire, and the disastrous Franco-Prussian war reduces Paris to a city under siege where starvation rules. 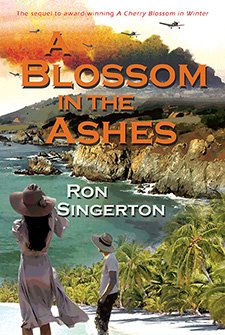 A Blossom in the Ashes

The Sequel to A Cherry Blossom in Winter — Tad, elder son of Russian-Japanese parents, flies planes for the U.S. Navy; his brother, Koizumi, is a fighter pilot in the Imperial Navy of Japan. When Koizumi visits his family in Hawaii, he is accompanied by the beautiful Sayuri. To Koizumi’s dismay, she and Tad begin a passionate romance, only to be torn apart when she and Koizumi are ordered back to Tokyo. All too soon, Tad discovers that, if being estranged from a brother for 25 years is bad, seeing him through your gun sights is worse. And as American bombs fall on Japan, Tad fears that he will never see Sayuri again. Commitment, terror, compassion and unswerving loyalty comprise A Blossom in the Ashes, a story of unyielding nations in a world gone mad. 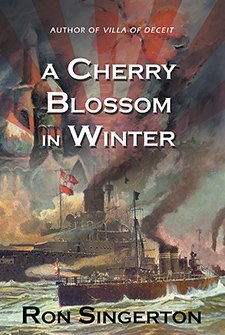 A Cherry Blossom in Winter

As the 20th century dawns, Japan is a rising power at odds with an expanding Russia. In Moscow and St. Petersburg, aristocrats advance their political interests and have affairs as factory workers starve. Young Alexei Brusilov, son of an ambassador, accompanies his father to Japan and there falls in love with the daughter of a Japanese war hero. Despite threats and warnings, he pursues this forbidden romance, delighted to discover that Kimi-san returns his affection, until disaster overtakes them. Amid the rising storm of revolution at home, Alexei returns to St. Petersburg to become a naval officer. A deadly rivalry with another cadet, a dangerous family secret, and friendships with revolutionaries imperil his career – and his life. Years later, Alexei finds himself aboard ship as the rusting and badly out of date Russian fleet is sent half way around the world to fight a modern and determined Japanese Navy. Will Alexei live to see his love again, or die under the blazing guns of the fast moving enemy cruisers? 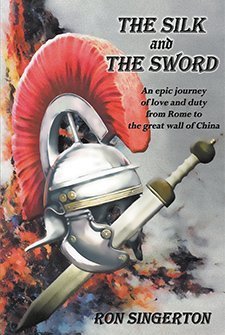 The Silk and the Sword

Gaius Centurion Book 2 — Young Tacitus is dragooned into the Roman army by his father Gaius, a bitter and unbending Centurion. With his father and seven legions, he joins General Marcus Crassus in an ill-fated attack on the sprawling Parthian Empire. After the Roman forces are decimated at the Battle of Carrhae, Tacitus, Gaius, and four hundred survivors venture eastward on the fabled Silk Road to find a river beyond a wall that will lead them back to Rome. Tacitus becomes the soldier he never wanted to be while battling bandits, trekking through frozen mountain passes, and dealing with a formidable foe on the other side of the world. But his greatest challenge is a personal quandary: should he return to Rome for his long-lost love or seek the hand of a princess in the mysterious land beside the Great Wall?

“Culled from primary historical references as recorded by Plutarch, Pliny and Julius Caesar, the author illuminates the fascinating, multi-faceted private and public worlds of the Roman legionnaire. Fans of both historical fiction as well as Roman history will find Ron Singerton’s The Silk and the Sword to be a highly engaging, satisfying read about one of the most detrimental defeats in Roman military history. — Chanticleer Editorial Review

“A tour de force of Roman military survival across a long and arduous trek through the Parthian empire, the silk road, and into the celestial kingdom. Singerton delivers an astounding look at what it takes to survive, and ultimately to find forbidden love, in a harshly foreign land. A gripping read backed by the kind of historical research that enlivens a story.” — Sean P. Curley, Award Winning Author of Propositum — A Novel 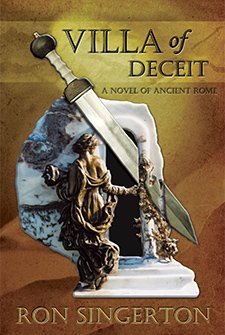 Villa of Deceit: a Novel of Ancient Rome

Gaius Centurion Book 1 — Rome, 70 BCE. A house in turmoil. Young Gaius defies his father, Toronius, fleeing with a slave girl whom he marries, only to see her die in childbirth. Disinherited and grieving, Gaius leaves his infant son Tacitus behind with a trusted aunt and devotes his life to the sword. On the battlefield Gaius is trained and tempered into a hardened veteran of war and the rank of senior centurion. But his greatest challenge is returning home to face Tacitus, now grown to a wild, undisciplined youth. Gaius forces the errant boy into the army that he may be molded into a man. Like Gaius before him, Tacitus must fight to become his own man in defiance of his father. But together as Legionnaires, they must survive an invasion mired by betrayal and confront the fury of war.

“Villa of Deceit: a Novel of Ancient Rome by Ron Singerton will keep readers turning the pages as the author vividly conveys the brutality and wanton disregard of life on and off the battlefield in this cleverly plotted historical novel that speaks to a time that would change Western Civilization for the next millennia.” — Chanticleer Editorial Review