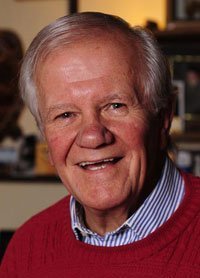 When you have been writing stories since the age of nine, including accounts of school visits to the zoo which won the coveted essay prize for two years in succession, it is hardly surprising that Roger Paine should become an author. Except that at the age of sixteen he left school in Leicester, England to join the Royal Navy as a very ordinary sailor. Although he claims to regret this impulsive teenage decision, Paine readily admits that had he not done do he would not have the fund of amusing yarns and stories which are the result of ‘scribbling away’ in an attempt to share the extraordinary number of laughs and bizarre experiences he encountered during twenty-eight years on the high seas.

During a career in which Paine rose from sailor in bell-bottom trousers to gold-laced senior officer, he first served two years in an aircraft carrier, then in various frigates and destroyers, two more aircraft carriers, a tank landing ship, the navy’s ice patrol ship, a period in mine-countermeasures vessels and time in a submarine, as well as service ashore in the UK. He visited ports in nearly every country in the world and in one twelve month period, in two different ships, crossed the Equator, the Arctic and the Antarctic Circles. In the rank of Commander he served in the Ministry of Defense, London, at sea on an admiral’s staff during the Falklands conflict and in Hong Kong, then a British colony.

Since voluntarily leaving the Royal Navy, Paine has been Secretary to the Trustees of the National Maritime Museum, Greenwich, when the Duke of Edinburgh was the senior trustee, the bursar of a large co-educational school, and partnership administrator of a national firm of land agents. Now a full-time writer, he is a regular contributor of book reviews, theatre reviews and features to magazines, newspapers and journals on a variety of subjects ranging from maritime topics to well-known poets and medieval churches.He is also the author of poems and plays. With a stuffed barn owl, a turtle and an armadillo for company, he lives in an eighteenth century cottage in rural Sussex. 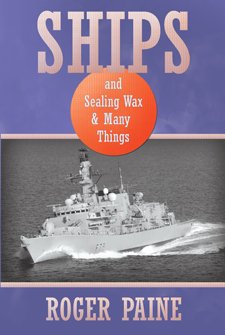 Ships and Sealing Wax & Many Things

Roger Paine, retired Navy commander and former secretary to the trustees of the National Maritime Museum, Greenwich, has authored a collection of true stories about fascinating people and places. If you have an interest in the sea, you can learn about how the cells in one of Scotland’s biggest prisons were emptied to provide crews for merchant ships in World War II, or how the father of a young musician playing in the palm court of the Titanic was sent a bill for 75p for new buttons on his uniform jacket two weeks after he drowned. In his landlubberly tales, Paine gives a guided tour around more than twenty ancient village churches in southern England. Wonder at how a gruesome collection of human skulls provides an attraction to visitors in a parish church, and discover how a young girl waited in vain for her lover from the vicarage next door and eventually died of a broken heart. Spend springtime with Robert Browning, summer with William Morris, autumn with John Keats, and Christmas with Kenneth Grahame—and find out what inspired these poets to write as memorably as they did. This delightful treasure trove of stories will keep you amused, astounded, and warmed in equal measure.

“What a cornucopia of a book! In its seventy odd chapters we are led through the passions and fascinations of the author. In the first section we take to the high seas, to be battered by rogue waves in one chapter, before we struggle our way to Malta in 1942 under unrelenting air attack in another. We sail board the Titanic, spend X-mas in the Royal Navy, are introduced to Oscar, the ship’s cat of the Bismarck and see the greatest naval battle of them all, Jutland, through the eyes of a Sussex teenager. Some chapters are inspired by the author’s personal recollections of the navy, a service that he obviously retains a huge affection for, others come from his own deep knowledge of the maritime world. This is a book to savour, to dip into and enjoy. Each chapter takes no longer than five minutes to read, and all can stand alone. Have it by the bed or next to the kettle, ready to consume another slice with your next mug of coffee.” — Philip K. Allan author of the Alexander Clay series 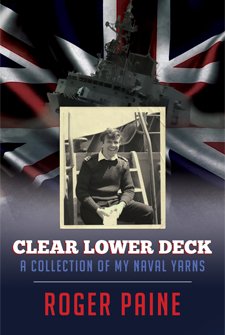 Do you know where the expression ‘grog’ comes from? Or what happened when the admiral’s parrot got seasick? Or why a gun-toting generalissimo in the Philippines distributed medals from a shoebox? Do you know why a distinguished royal visitor had difficulty in flushing the ship’s toilet in Antigua or why Invergordon was referred to as ‘dump’? Or have you heard about a cat called Oscar who was sunk with the German battleship Bismarck in World War II but survived to be sunk twice more in the ships which rescued him? The answers to these questions, and other true salty stories, can be found in this book by former Royal Navy officer Roger Paine, as he charts the ups and downs of life, both ashore and afloat. Together with recipes for rum punch and Christmas cake, plus the traditional RN toasts for each day of the week, this delightfully irreverent, and occasionally indiscreet, collection of ‘yarns’ is here to be savoured and treasured. Shortlisted for a Mountbatten Maritime Media Award, 2010.