Roger Hileman writes nonfiction for a testing company by day and fiction by night. Naturally, the biggest challenge for Roger is keeping them straight. He and writing partner Dave Hoing collaborated for many years by mailing reams of paper back and forth through the US mail. Then one day someone invented this thing called the Internet. There was much rejoicing.

Through the years, Roger has been involved with numerous musical theater productions on stage, in technical roles, and as orchestra director. He gigs around Iowa with groups such as the New Venue Big Band and CR Jazz. He began his writing career as a playwright, but Dave eventually turned him to the dark side of prose. Roger loves history, especially the family kind, so his ancestors frequently become fodder for his fiction.

In his nonfictional world, Roger and his wife, Lu, live in Iowa City. They have three daughters, Andrea, Rachel, and Carlye, and three grandchildren, Everett, Ellye, and Zachariah. No pets, but he plays a bass trombone he named Eddie. 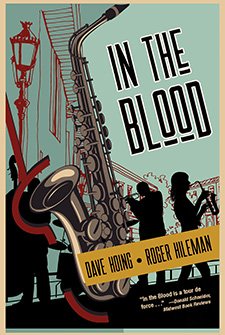 The trouble with K.C. Brown’s dream of playing alto sax for a local jazz band is that she’s a nineteen-year-old white girl, the band members are middle-aged black men, the year is 1948, and they all live in a racially divided town in Iowa.
To succeed, she and the band must overcome resistance from both sides of the color barrier, and accept that ambition often comes with loss. In the Blood explores the cultural, sexual, generational, and economic issues in post-World War II America, framed in the context of a friendship and understanding that develops between K.C. and the band’s ailing trombonist, Freddie Ross.

“This book is about music, it’s about cultural shifts, and it’s about life. In the Blood is smartly written, with every musical term and description spot-on.” —Diane Thayer, music educator

“In the Blood is a tour de force . . .” —Donald Schneider, Midwest Book Reviews 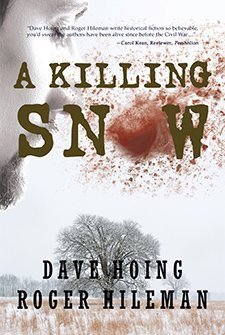 When aspiring journalist Mariel Erickson leaves the civilized comforts of Chicago for Goss Valley, a small town on the Dakota prairie, she isn’t prepared for the turmoil she and her husband encounter. As if hostile homesteaders, harsh weather, impoverished Indians, and shady frontier politics aren’t bad enough, Mariel soon finds herself embroiled in Goss Valley’s first murder case.The facts of the case appear straightforward. In full view of five witnesses, wagon driver Clyde Hartwig beat an Irish immigrant to death with a baseball bat. The victim was known as a decent and hardworking family man. But Mariel hears rumors of his involvement with homemade bombs and Fenian terrorism. Could that have been Hartwig’s motive? On assignment for the town’s fledgling newspaper, Mariel must get the killer’s side of the story before he’s silenced by the hangman’s rope.

“A Killing Snow is a superlative literary effort of historical fiction, related in a compelling style of prose, well worth the time of readers interested in such historically riveting fare. The reader does indeed appreciate the feeling of “being there” in an age not all that long ago, yet seemingly strangely exotic to people of contemporary values and marvels of material and technological innovations so alien to those who lived then.” — Midwest Book Review

“Mariel is a schoolteacher who emigrates to the Dakota Territory at the time of initial European dominance. A Killing Snow engages us as we see Mariel’s determined efforts to adapt to her new environment. The authors take the reader back 130 years, there to see characters facing a set of circumstances and challenges radically different from those of our digital age. As a reader of biographies, histories, and many sorts of novels, I found quite a bit to enjoy in A Killing Snow…. The reader moves briskly through the story, following Mariel’s observations and experiences, including several traumatic recollections from her husband Randall and his Civil War buddy Mike Hammon. Her students are vulnerable young people experiencing the troubles of youth, while the many adults with whom Mariel interacts have a multitude of their own problems, many resulting from their clashing cultures. A Killing Snow does a nice job, a well-practiced job, of depicting all of the above.” — William Tate, author of Dark Strides

“It’s hard to beat a good pioneer story. You have people who are somewhat—or maybe completely—isolated by choice, facing a climate more harsh than any they had seen before, and still dealing with the challenges of being human in the development of family and community. A Killing Snow is a wonderful addition to pioneer literature. The characters are flawed—like other humans. In the very small community of Goss Valley, Dakota Territory, people are often thrown together with others they wouldn’t have associated with back East, and either have to make the best of it, or not. Both courses have consequences…. A murder of a shunned immigrant by a reviled citizen would not be expected to polarize the community or weave itself into unrelated events, but it does because of the complex relationships among the characters. Hoing and Hileman do a great job of elaborating the context of the times: a couple of decades after the Civil War, the height of immigration, the beginnings of modern technology (the post office gets a telephone but it is useless for the time being because no one else has one). A wonderful and enjoyable read.” — Karen Nortman, author of The Time Travel Trailer