She loved The Andy Griffith Show in the sixties, along with Ron Howard, who played the little kid. “Later I realized I was that little kid,” explains Kerry. “I grew up in a police station in rural Australia where the police phone and radio sat on our kitchen bench and my father’s Lithgow .22 rifle rested against the fridge. There were five kids, a dog, a cat, ferrets, a budgie, chickens, a sheep, and total chaos. At 10 years of age I’d have a tray shoved in my hand by my mother and told to ‘go feed the prisoner.’ I had to pour the prisoner’s tea from a pot through the bars.” Kerry wrote three books about her hilarious childhood.

“It was far too crazy to study at home so I had the keys to the local courthouse, which was built in 1856, and I did my high school homework in the jury room.” Later Kerry studied science/engineering at Melbourne University and taught maths and science for 10 diabolical years before becoming a bestselling Australian author of 20 humorous and educational books, including Life On a G-String, I Left My Heart in Chinkapook … and My Knickers in New York, and MeLand: 10 Ways Self-Obsession Makes You Stupid.

She has written columns for every major newspaper in Australia, with some running for over 20 years. “The best thing about being a humorist,” says Kerry, “is that you get to give totally unreliable advice to absolutely anyone on any topic.” She also travels around Australia enlivening serious but dull conferences with humorous presentations, such as her stress-management talk titled “And When You Smile, Try to Look Sane.” She is the maths blogger Mathspig, with over one million hits. Following the popularity of her blog, she spoke at the International Congress of Mathematical Education in Hamburg in 2016 as that very rare breed, a comic math blogger.

Kerry has two adult children and stepchildren. She lives in Melbourne, Australia with her husband and her little dog. 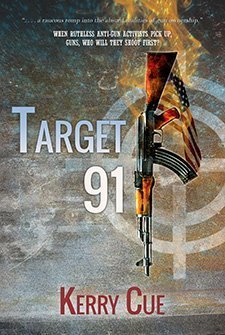 One body, then another and another, turn up in different states each one skewered by an AK-47 with a small US flag attached to the rifle butt and the words BAN THIS WEAPON printed on the back. When young, tweeting, texting, blogging journalist Kitchi Le labels the killers the Anti-Gun Brigade (AGB), they start communicating their threats through her. But who are the victims? And why were they targeted? The National Gun and Shooters Association (NGSA) CEO, Gig DeKant goes ballistic claiming ‘the depraved, godless, tree-hugging, vegetarian fringe of the loony Left don’t want ordinary Americans to be armed.’ When the AGB name DeKant as a target he calls on his brothers-in-arms to gun down ‘those loony lefties’. This sparks a politically-charged media frenzy and triggers a race to stop the AGB. Suddenly the lives of Quincey Washington Booker (Organized Crime NY FBI), Denney O’Shea (Undercover FBI), DeKant and Kitchi Le become dangerously entwined. The pace is runaway train fast. The humor puts the idiotic-side of US Gun Culture in the cross-hairs. While the up-against-the-wall sex is worth the price of the book. The many twists and turns in the plot will keep you furiously reading until the last page. The morals and ethics of both sides of the gun debate are tested in this satirical suspense novel. All small details are based on facts: typical gun lobby rants, the 2008 Heller judgment that put hand guns back on the street in the US, cost of an AK-47, open carry laws, the holed-up militias, cost of ammo and gun chat room rants.