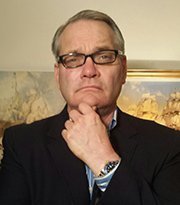 Napoleonic Techno Thrillers — John M. Danielski believes one learns best by doing and has actually carried out many of the ordinary tasks that his protagonist Tom Pennywhistle performs in The King’s Scarlet and Blue Water, Scarlet Tide. He worked his way through university as a living history interpreter at historic Fort Snelling, the birthplace of Minnesota. For four summers he played a US soldier of 1827—wore the uniform, performed the drills, demonstrated the volley fire with other interpreters, and even ate the food. A heavy blue wool tailcoat and black shako look smart and snappy but are pure torture to wear on a boiling summer day.

Danielski has a practical, rather than theoretical, perspective on the weapons of the time. He has fired either replicas or originals of all of the weapons mentioned in his works with live rounds, six- and twelve-pound cannon included. The effect of a twelve-pound cannonball on an old Chevy four door must be seen to be believed.

He has a number of marginally useful university degrees, including a degree in history from the University of Minnesota. He is a Phi Beta Kappa and holds a black belt in tae kwon do. He has taught history at both the secondary and university levels and has worked as a newspaper editor. His literary mentors were C. S. Forester, Bruce Catton, and Shelby Foote.

Danielski currently lives in the Twin Cities suburbs with his faithful companion Sparkle, the wonder cat.

Author’s Note About the Pennywhistle Series

Who’s the tall, tiger-muscled stranger in a smart scarlet uniform aiming an extraordinary rifle? Bloody likely it’s Tom Pennywhistle. He’s a Royal Marine captain who is always first into the fray, whether battling on the rolling decks of a frigate at sea or storming an enemy fort inland. The Pennywhistle series chronicles his adventures during the Napoleonic Wars. Active’s Measure, book one, takes him to the Adriatic aboard HMS Active. The King’s Scarlet has him trapped behind French lines in Spain. Blue Water, Scarlet Tide takes him to the Chesapeake where fights a series of hit and run battles with American militia as well as slave catchers. Capital’s Punishment details the fall of Washington. Bellerophon’s Champion, records his baptism of fire at Trafalgar. While the books are fiction, Pennywhistle’ s persona is loosely based on an actual Royal Marine of the period, Captain Thomas Inch. 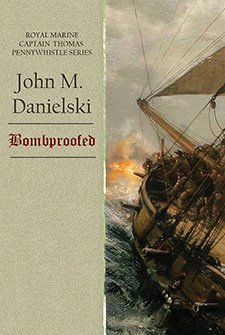 Royal Marine Captain Thomas Pennywhistle Series — Death limits a man’s future opportunities, but for Royal Marine Major Thomas Pennywhistle, death expands them. After a near death experience, he sees the world with enlightened eyes and enhanced perceptions. He will need them, because he has a code to break, a murder to solve, and spies to outfox. He will be entering a world of international intrigue, confronting a conspiracy to undermine the British monarchy. His capacity for guile, quick thinking, and decisive action have served him well in combat; now he will exercise his talents in the arena of politics.
Pennywhistle has a staunch ally in his resourceful American bride, but Sammie Jo is a fish out of water in Regency England, struggling to find her footing in high society. Marriage is an undiscovered country for both of them. Will they lose their way or trust their hearts’ compass?
From the battlefield grime of Tidewater Maryland to the elegant halls of St. James Palace, Pennywhistle’s courage will be tested, and he will be asked to serve his country in ways that he could never have imagined. 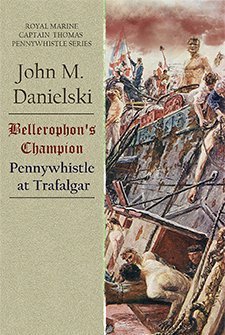 Royal Marine Captain Thomas Pennywhistle Series — Deep within each man, lies the secret knowledge of whether he is a stalwart or a coward. Three years an un-blooded Royal Marine, 1st Lieutenant Thomas Pennywhistle will finally “meet the lion,“ protecting HMS Bellerophon at the Battle of Trafalgar. Not only will Pennywhistle be responsible for the lives of 72 Marines aboard Bellerophon but their direction will fall entirely on his shoulders since his fellow Marine officers consist of a boy, a card shark, and a dying consumptive. If he has what it takes to command, it will take everything he’s got. In the course of battle, he will encounter marvels and terrors; from valiant foes to women performing miracles, from the skill of acrobats to the luck of the ship’s cat, from a dead man still full of fight to a coward who has none. Pennywhistle and his Marines will meet enemy élan will with trained volleys and disciplined bayonets. Most of all, he will meet himself; discovering just how dark his true nature really is. Europe will be changed forever by Trafalgar, and so will Pennywhistle.

Royal Marine Captain Thomas Pennywhistle Series Book 4 — The White House is in flames, the Capitol a gutted shell. President Madison is in hiding. Organized resistance has collapsed, and British soldiers prowl the streets of Washington. Two islands of fortitude rise above the sea of chaos–one scarlet, one blue. Royal Marine Captain Thomas Pennywhistle has no wish to see the young American republic destroyed; he must strike a balance between his humanity and his passion for absolute victory. Captain John Tracy of the United States Marines hazards his life on the battlefield, but he must also fight a powerful conspiracy that threatens the country from within. Pennywhistle and Tracy are forced into an uneasy alliance that will try the resolve of both. Together, they will question the depth of their loyalties as heads and hearts argue for the fate of a nation.

Royal Marine Captain Thomas Pennywhistle Series Book 3 — It’s the summer of 1814, and Captain Thomas Pennywhistle of the Royal Marines is fighting in a New World war that should never have started, a war where the old rules of engagement do not apply. Here, runaway slaves are your best source of intelligence, treachery is commonplace, and rough justice is the best one can hope to meet—or mete out. The Americans are fiercely determined to defend their new nation and the Great Experiment of the Republic; British Admiral George Cockburn is resolved to exact revenge for the burning of York, and so the war drags on. Thanks to Pennywhistle’s ingenuity, observant mind, and military discipline, a British strike force penetrates the critically strategic region of the Chesapeake Bay. But this fight isn’t just being waged by soldiers, and the collateral damage to innocents tears at Pennywhistle’s heart.
As his past catches up with him, Pennywhistle must decide what is worth fighting for, and what is worth refusing to kill for—especially when he meets his opposite number on the wrong side of a pistol. 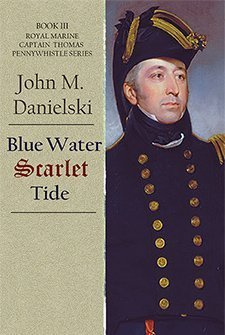 Royal Marine Captain Thomas Pennywhistle Series Book 2 — Chivalry comes naturally to Royal Marine captain Thomas Pennywhistle, but in the savage Peninsular War, it’s a luxury he can ill afford. Trapped behind enemy lines with vital dispatches for Lord Wellington, Pennywhistle violates orders when he saves a beautiful stranger, setting off a sequence of events that jeopardize his mission. The French launch a massive manhunt to capture him. His Spanish allies prove less than reliable. The woman he rescued has an agenda of her own that might help him along, if it doesn’t get them all killed. A time will come when, outmaneuvered, captured, and stripped of everything, he must stand alone before his enemies. But Pennywhistle is a hard man to kill and too bloody obstinate to concede defeat.

“Once again Danielski’s exceptional gift for matching a rollicking good adventure story with significant historical and period details makes this second novel a genuine page-turner … a writer whose facility and ingenuity brings to life in vivid but accurate detail the colours and wildlife of the high Spanish Sierra de Francia as he guides his heroes to the culminating Battle of Salamanca. The Peninsular War is one of the lesser-known areas of the Napoleonic era and is ably realized for us through Danielski’s insight and powers of believable recreation as we follow the exciting exploits of this small but dangerously powerful party of undercover British marines.” —George Odam, Professor Emeritus, Bath Spa University, Bath, England

“Mr. Danielski knows his subject with a confidence that allows him to write in a style that enhances the story and engages the reader. It is like a first rate adventure story with an elegance of writing we do not often encounter.” —James Kraft, editor of Prose Pieces: The Works of Witter Bynner.

“Once you open the pages of The King’s Scarlet, you will immediately escape to the Iberian peninsula of 200 years ago. All your senses will be fully stimulated by the rapid paced descriptions of war through the eyes of vividly drawn characters…You are there seeing the worst of mankind, but the indomitable spirit of human goodness is never quenched and well represented by the hero, Tom Pennywhistle. A great novel which pulses with life and is soulfully satisfying.” — James A. Taylor, Isabel Herson/Casino Rouge Endowded Professor, Southern University and A.&M. College