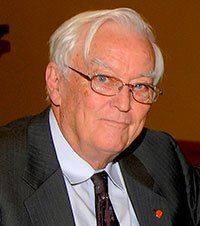 John Harmon McElroy was born in a small glass-manufacturing town on the banks of the Allegheny River in Pennsylvania, and two of his ancestors fought for American independence in the Revolutionary War. A graduate of Princeton University, John spent two years as an ensign on a destroyer escort radar picket ship in the mid-Atlantic, keeping watch for Soviet bombers. He is a professor emeritus of American literature at the University of Arizona, was twice appointed a Fulbright professor of American studies, and is the author of four books on American cultural history. For over twenty years he taught The Autobiography of Benjamin Franklin in a course he created called Literature of the Early Republic.

John and his wife, Onyria Herrera McElroy, PhD, were married in Havana, Cuba, in 1957. Their adventures together include spending an afternoon conversing with Ernest Hemingway at his home Finca La Vigía outside Havana, planting 500 redwoods in Galicia, Spain, to commemorate Columbus’s world-changing voyage of discovery, making a 480-mile pilgrimage on the Camino de Santiago, and John’s firewalking at a festival in Soria, Spain, that has celebrated the summer solstice since time immemorial. They live in Tucson, Arizona, and have four children, eight grandchildren, and two great-grandchildren.

John’s most recent work, The Quaker Murders, delves into the life of Benjamin Franklin as he becomes involved in a brutal murder mystery and tries to spare the accused from an unwarranted hanging. The book contains rich details about Franklin and life in 18th-century Philadelphia—the world’s largest English-speaking city after London—which was still recovering from the rigors of the war for independence.

Benjamin Franklin and the Quaker Murders

In September of 1785, everyone in Philadelphia thinks Jacob Maul, the Quaker stonecutter, is a murderer. How could there be any doubt? Two women have been found dead on his property–one of them in his bed–with bruise marks on their throats. The only person who comes to a different conclusion is the city’s most famous citizen, Benjamin Franklin.But at seventy-nine years of age, Franklin doesn’t want to acquire a reputation for solving his neighbors’ problems. Instead, he recruits a younger man, Revolutionary War veteran James Jamison, to make inquiries under his direction and collect information that could prove the Quaker’s innocence. Franklin’s considerable intelligence guides Jamison, but as the investigation unfolds, details emerge that threaten to dismantle the great man’s assumptions.
The Quaker Murders contains rich details about both Benjamin Franklin and life in eighteenth-century Philadelphia, a large, bustling city that was still recovering from the rigors of the war for independence.