J. A. Ironside grew up in a house full of books in rural Dorset. She loves speculative fiction of all stripes, especially fantasy and science fiction, although when it comes to the written word, she’s not choosy and will read almost anything. It would be fair to say that she starts to go a bit peculiar if she doesn’t get through at least three books a week.

She mostly writes fantasy and sci-fi. Often this leans toward the dark fantastic or dystopian forms of fiction. Occasionally there’s some outright horror. Her passion for all things dark and dystopian stems from the fact that these narrative vehicles bring out the very best and absolute worst in people. She finds it endlessly fascinating to explore what it means to be human by—figuratively—putting her characters’ backs to the wall. Often they’ll even surprise her with the lengths they’ll go to to achieve their goals.

As a keen martial artist, Jules has studied several disciplines but is most accomplished in Goju-ryu karate, which she has studied and taught for over twenty years. Her favorite things include books (obviously), slippers, cheese, and surreal conversations.

She lives in Gloucestershire, on the edge of the Cotswold way, with her boyfriend-creature and a small black and white cat, both of whom share a God complex. Her first book, paranormal mystery novel I Belong to the Earth, was published by Illusio & Baqer in May 2015. 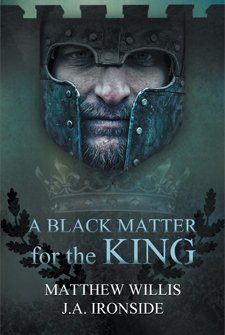 A Black Matter for the King

The Oath and Crown Book 2.Two powerful rivals — one decisive battle. Now a political hostage in Falaise, Ælfgifa forms an unlikely friendship with William, Duke of Normandy. William has been swift to recognize her skills and exploit them to his advantage. However, unbeknownst to the duke, Gifa is acting as a spy for her brother, Harold Godwinson, a possible rival for the English throne currently in the failing grip of Edward the Confessor. Homesick and alienated by the Norman court, Gifa is torn between the Duke’s trust and the duty she owes her family. William has subdued his dissenting nobles, and a united Normandy is within his grasp. But the tides of power and influence are rarely still.
As William’s stature grows, the circle of those he can trust shrinks. Beyond the English Channel, William has received news of Edward’s astonishing decree regarding the succession. Ælfgifa returns to an England where an undercurrent of discontent bubbles beneath the surface. An England that may soon erupt in conflict as one king dies and another is chosen. The ambitions of two powerful men will decide the fates of rival cultures in a single battle at Hastings that will change England, Europe, and the world in this compelling conclusion to the Oath & Crown series on the life and battles of William the Conqueror. 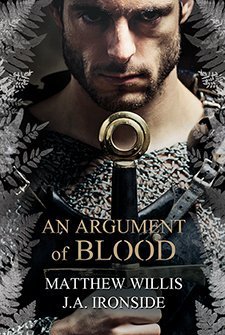 An Argument of Blood

The Oath and Crown Book 1.William, the nineteen-year-old duke of Normandy, is enjoying the full fruits of his station. Life is a succession of hunts, feasts, and revels, with little attention paid to the welfare of his vassals. Tired of the young duke’s dissolute behavior and ashamed of his illegitimate birth, a group of traitorous barons force their way into his castle. While William survives their assassination attempt, his days of leisure are over. He’ll need help from the king of France to secure his dukedom from the rebels.On the other side of the English Channel lives ten-year-old AElfgifa, the malformed and unwanted youngest sister to the Anglo-Saxon king Harold Godwinson. AElfgifa discovers powerful rivalries in the heart of the state when her sister Ealdgyth is given in a political marriage to King Edward, and she finds herself caught up in intrigues and political maneuvering as powerful men vie for influence. Her path will collide with William’s, and both must fight to shape the future.

“I thoroughly enjoyed it! The brutal and deadly world of medieval Normandy is wonderfully depicted.” — Jemahl Evans, author of The Last Roundhead