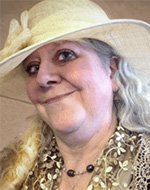 Swashbuckling Action, Adventure and Supernatural Surprises — Born Helen Mary Turner in Walthamstow, northeast London in 1953, I began writing at the age of thirteen. Desperately wanting a pony of my own, but not being able to afford one, I invented an imaginary pony instead, writing stories about our adventures together at every spare opportunity.

In the seventies I turned to science fiction; this was the age of Dr Who, Star Trek and Star Wars (first time round!). I still have an unfinished adventure about a bit of a rogue smuggler who travelled space with his family, making an honest(ish) living and getting into all sorts of scrapes. Perhaps one day I might finish it.

I had wanted to become a journalist when leaving secondary school, but my careers advice at Wellington Avenue Secondary School for Girls, was not helpful. “Don’t be silly,” I was told, “you can’t type.” (I still can’t, I use four fingers.) Instead, I worked in South Chingford library where I stayed for thirteen years, although I was not very happy there – I did not realize it, but I wanted to write. The one advantage of the library, however, was the access to books, and it was there that I came across the Roman historical novels of Rosemary Sutcliff, the Arthurian trilogy by Mary Stewart, and the Glastonbury-based historian Geoffrey Ashe. I was hooked on Roman Britain – and the historical speculations about King Arthur!

Reading everything I could, I eventually became frustrated that novels about Arthur and Gwenhwyfar (Guinevere) were not satisfying my theories and ideas, or how I saw them as characters. So I decided to write my own version. Little did I know that it would take me more than ten years.

I married Ron in 1981, and our daughter, Kathy, came along a year later. Writing was somewhat half-hearted, but when Kathy went to playgroup I had a some space of my own time on my hands to get back to writing.

I had a small success with a children’s personal safety book (stranger danger) called “Come and Tell Me,” a little story that I wrote for Kathy, and was immensely proud when the British Government took it as their official safety book for a period of ten years. It was even included as a featured story in a children’s TV program.

So, after twenty-six years of ‘professional’ writing, I have come full circle – back to being mainstream traditionally published, although I still support Indie authors with undiminished passion. One way of doing so, back in January 2017 I founded Discovering Diamonds, an online review site for Historical Fiction, geared especially towards Indie and Self-Published writers. 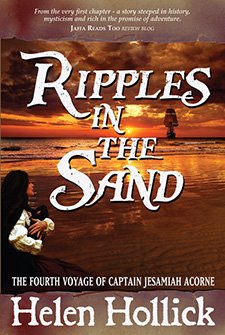 Ripples in the Sand

Voyages of Captain Jesamiah Acorn Book 4. Approaching England’s North Devon Coast Captain Jesamiah Acorne is worried. A Royal Navy frigate is trailing in his wake and Sea Witch has a hidden cache of brandy and indigo aboard. His instinct is to hoist full sail and flee, but he cannot attract attention, for his wife, Tiola, is ill and getting worse. She says the sea is affecting her, but Jesamiah has never seen seasickness like this before – is it something worse; something to do with her being a white witch perhaps? Like an approaching storm, his worries get deeper, darker and more sinister. Tiola’s brother, Ben, is in gaol, arrested for smuggling. At a loss of how to help him, opportunity comes in the unexpected form of Sir Ailie Doone – the last of the notorious Doone family of Exmoor. He offers Jesamiah a highly secret but lucrative commission to go to Spain and bring back to England a man who will lead a Jacobite rebellion. It seems an ideal solution, but first Jesamiah must break young Ben out of gaol. Once escaped from the threat of the gallows, the boy can sail with Jesamiah on the Sea Witch leaving Tiola ashore to recover in peace. Except, being captured and interrogated by the Spanish and meeting with an old friend, the beautiful English spy Francesca, is not part of Jesamiah’s plan. Once again he is in danger of losing his fidelity, his freedom and maybe even his life. Tiola meanwhile, has her own fears to face. Why is the ethereal spirit of the sea, Tethys, so determined to have Jesamiah for her own? To save him, Tiola must find a way to recall her previous lives and discover why events of the past have influenced the hatreds of the present. Like ripples in the sand blending together when disturbed, she must influence the fragile ripples of time . . . 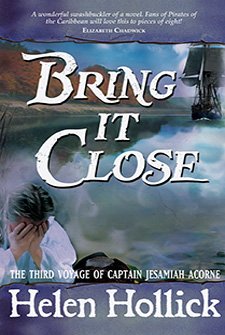 Voyages of Captain Jesamiah Acorn Book 3. Too much trouble has come too close! Jesamiah Acorne, Captain of the Sea Witch, has accepted a government-granted amnesty against his misdeeds of piracy, but old enemies do not forget the past. In particular Edward Teach – Blackbeard himself – has a bone to pick with Acorne. Following an indiscretion with an old flame, Jesamiah finds his fiancée, the midwife and white witch Tiola Oldstagh, has gone to North Carolina to help with a difficult birth. The problem; that is where Blackbeard now resides. He mustn’t discover that Tiola is Jesamiah’s woman. She will have to hide her identity and her gift of Craft from the black-hearted pirate who has sold his soul to the devil. With Sea Witch damaged and himself wounded, Jesamiah has to take stock of his situation, but arrested for acts of piracy how is Jesamiah Acorne to clear his name, overturn a sentence of hanging, keep Tiola safe, put an end to Blackbeard and deal with being haunted by the ghost of his father? Bring It Close moves from the Bahamas to North Carolina and Colonial Williamsburg in Virginia at a swashbuckling pace. There is intrigue, misunderstanding, romance and adventure all wrapped up in a blend of mystical fantasy. 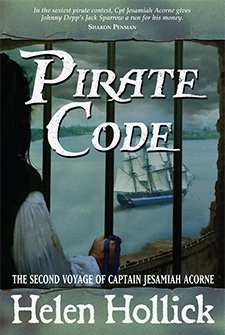 Voyages of Captain Jesamiah Acorn Book 2. Ex-pirate Captain Jesamiah Acorne is in trouble. Big trouble. All he wants to do is marry his girl, Tiola Oldstagh, and live contented aboard his ship, Sea Witch, but Tiola’s husband refuses to grant her a divorce unless Jesamiah retrieves some barrels of indigo and smuggles them out of the Spanish-held Caribbean island of Hispaniola. The Governor of Nassau wants Jesamiah to go there too, to assist in starting a rebellion, and Captain Henry Jennings wants him to find a lost spy. Add to that, Tethys, the spirit of the sea, wants Jesamiah for her own and sets her daughter, Rain, to go fetch him. To cap it all, Commodore Vernon of the Royal Navy wants to expand his fleet and craves to own Sea Witch for himself. As Jesamiah’s hopes for a quiet life tumble about him, the onset of war with Spain scuppers everyone’s plans. Intrigue, fights, romantic passions and trouble follow Captain Acorne like a ship’s wake–not the ideal for a quiet life, and not Jesamiah’s idea of the rules of the Pirate Code. 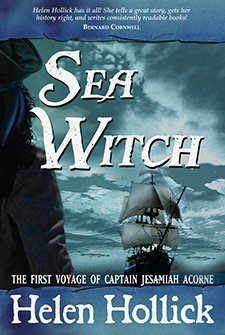 Voyages of Captain Jesamiah Acorn Book I. The Time: The Golden Age of Piracy – 1716. The Place: The Pirate Round – from the South African Coast to the Caribbean. Escaping the bullying of his elder half-brother, from the age of fifteen Jesamiah Acorne has been a pirate with only two loves – his ship and his freedom. But his life is to change when he and his crewmates unsuccessfully attack a merchant ship off the coast of South Africa. He is to meet Tiola Oldstagh an insignificant girl, or so he assumes – until she rescues him from a vicious attack, and almost certain death, by pirate hunters. And then he discovers what she really is; a healer, a midwife – and a white witch.
Tiola and Jesamiah become lovers, but the wealthy Stefan van Overstratten, a Cape Town Dutchman, also wants Tiola as his wife and Jesamiah’s jealous brother, Phillipe Mereno, is determined to seek revenge for resentments of the past, a stolen ship and the insult of being cuckolded in his own home.
When the call of the sea and an opportunity to commandeer a beautiful ship – the Sea Witch – is put in Jesamiah’s path he must make a choice between his life as a pirate or his love for Tiola. He wants both, but Mereno and van Overstratten want him dead. In trouble, imprisoned in the darkness and stench that is the lowest part of his brother’s ship, can Tiola, with her gift of Craft and the aid of his loyal crew, save him? Using all her skills Tiola must conjure up a wind to rescue her lover, but first she must brave the darkness of the ocean depths and confront the supernatural being, Tethys, the Spirit of the Sea, an elemental who will stop at nothing to claim Jesamiah Acorne’s soul and bones as a trophy for herself.

“Everything we want in a grand pirate adventure … a terrific read.” — James L. Nelson, Author

“Really well rounded characters in story lines full of historical detail – these books just whiz along. Where the author has altered history to suit, she tells you where and why in her Afterword. Difficult to put down, so allow for some late nights.” — Amazon Review

“It’s been years since I read any pirate adventures and this one did not disappoint, it brought all the atmosphere of the great wooden ships, creaking into the rolling oceans, sails flapping in the winds. Dangers of the open seas and the realistic harbour-side towns which sprang up to meet the needs of the ocean-going sailors. I look forward to reading the next adventure for Captain Jesamiah Acorne.” — Amazon Review

“Sea Witch is labeled as the first voyage of Jesamiah Acorne, a pirate cut from a similar cloth to Jack Sparrow. Well, if this novel is any indication, long may his voyages continue. Sea Witch is a wonderful, rollicking, swashbuckling, romantic pirate-ride of a novel that I highly recommend to anyone with a taste for romance, adventure, pirates, or the sway of a deck beneath their feet. Simply put, to anyone who appreciated a good story, well told: this book is for you!” — Amazon Review

“Helen Hollick creates vivid pictures for the reader. Her meticulous description of the ships and ocean brings this adventure a strong sense of place. However, the most compelling of all are the characters with their deep fears, desires, needs, loyalties and loves that propel the action through hate, blood, brutality, and misery to finally sail into tranquil waters that promise destinies will be fulfilled- in time.” — Amazon Review