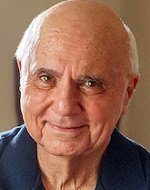 Donald Michael Platt was born and raised in San Francisco, graduated from Lowell High School and received his BA in history from the University of California at Berkeley. After two years in the army, Donald attended graduate school at San Jose State, where he won a batch of literary awards in the annual Senator Phelan Literary Contest.

Donald taught English and creative writing at Los Gatos Union High School, then moved to Southern California to begin his professional writing career. He sold to the TV series Mr. Novak, ghosted for health food guru Dan Dale Alexander, and wrote for and with diverse producers, among them Harry Joe Brown, Sig Schlager, Albert J. Cohen, and Al Ruddy, as well as Paul Stader Sr., Hollywood stuntman and stunt/second unit director. While in Hollywood, Donald taught creative writing and advanced placement European history at Fairfax High School, where he was the chairman for the Social Studies Department. 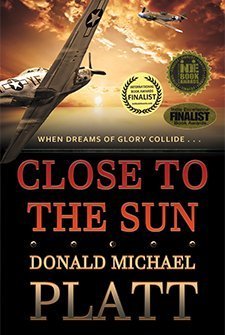 The award winning story of the tumultuous lives of fighter pilots and exceptional women, newly recruited to serve on both sides of World War II. Hank Milroy from Wyoming has idealized the gallant exploits of World War I fighter aces since boyhood. Seth Braham falls in love with flying during an air show at San Francisco’s Crissy Field. Braxton Mobley, the hotshot from Texas, wants to outscore every man in the air force. Texas tomboy Catherine “Winty” McCabe is as good a flyer as any man. In Germany, Karl Fürst von Pfalz-Teuffelreich aspires to surpass his father’s forty-nine Luftsiegen; Princess Maria-Xenia, a stateless White Russian, works for German intelligence; and Elfriede Wohlman is a frontline nurse with a dangerous secret. Dreams of glory soon collide with the brutality of callous political decisions, disastrous mistakes, and horrific atrocities and soon they fight not only to fulfill their missions, but to survive with their honor intact. 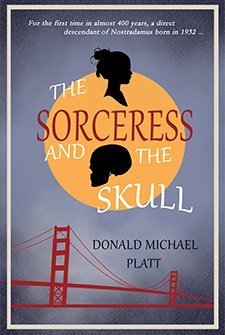 The Sorceress and The Skull

A gothic horror novella from award-winning author, Donald Michael Platt. San Francisco 1946: A Confrontation of Sorcerers and Seers. For the first time in almost 400 years, Michele born in 1932, a direct descendant of Nostradamus, will have all his gifts of precognition and even greater powers, but they will not be fully manifested until after she enters puberty. More than one secret society has been obsessed with finding and controlling Michele, to learn from her where Nostradamus’ unpublished prophecies have been sequestered. Hidden since birth, protected by aliases, an aunt, and a gargoyle, Michele at age 13 has become a fugitive, fleeing across Europe and Canada before finally arriving in San Francisco. Around Michele deadly forces are closing in, but a new ally, Le Crâne, the Skull, has also appeared, coming to the aid of the young seer. Who will hold claim to Michele’s powers and at what price to her? And who will succeed in acquiring the hidden secrets of Nostradamus? 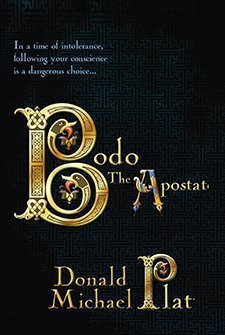 In a time of intolerance, following your conscience is a dangerous choice… “In the meantime, a credible report caused all ecclesiastics of the Catholic Church to lament and weep.” – Prudentius of Troyes, Annales Bertiniani, anno 839. On Ascension Day May 22, 838, Bishop Bodo, chaplain, confessor, and favorite of both his kin, Emperor Louis the Pious, son of Charlemagne, and Empress Judith, caused the greatest scandal of the Carolingian Empire and the 9th century Roman Church.
Bodo, the novel, dramatizes the causes, motivations, and aftermath of Bodo’s astonishing cause célèbre that took place during an age of superstitions, a confused Roman Church, heterodoxies, lingering paganism, broken oaths, rebellions, and dissolution of the Carolingian Empire. 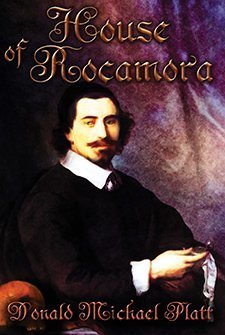 Vincente de Rocamora Book 2. A new life and a new name … House of Rocamora, a novel of the 17th century, continues the exceptional life of roguish Vicente de Rocamora, a former Dominican friar, confessor to the Infanta of Spain, and almost Inquisitor General. After Rocamora arrives in Amsterdam at age forty-two, asserts he is a Jew, and takes the name, “Isaac,” he revels in the freedom to become whatever he chooses for the first time in his life. Rocamora makes new friends, both Christian and Jew, including scholars, men of power and, typically, the disreputable. He also acquires enemies in the Sephardic community who believe he is a spy for the Inquisition or resent him for having been a Dominican.
As Isaac Israel de Rocamora, he studies Medicine at Leyden and, at age forty-six, receives a license to practice. That same year Rocamora weds twenty-five year old Abigail Touro, and together they raise a large family. During his time in Amsterdam, Rocamora has a bizarre encounter with Rembrandt, serves the House of Orange as physician, and advises Spinoza before the philosopher’s excommunication. He survives a murder attempt, learns from the great English physician Harvey, and a surprise visit from a childhood friend leads to an unusual business venture. Life is never routine or dull for Rocamora. The intrigues start with his arrival in Amsterdam and do not end until he takes his last breath.

“Rocamora is the best historical novel I have read, a fascinating story, well written with vividly portrayed unforgettable characters.” –Christiane Engel, MD, PhD, concert pianist, and member Board of Directors of her grandfather Albert Schweitzer’s Hospital in Lambarene, Gabon “You have a fine historical novel.” —Barnaby Conrad, author of Matador, Manolete, and The Second Life of John Wilkes Booth 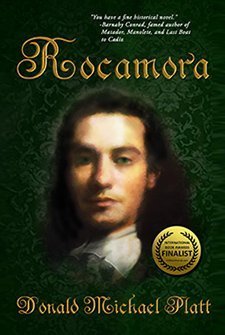 Vincente de Rocamora Book 1. No man is closer to a woman than her confessor, not her father, not her brother, not her husband. -Spanish saying. Vicente de Rocamora, the epitome of a young renaissance man in 17th century Spain, questions the goals of the Inquisition and the brutal means used by King Philip IV and the Roman Church to achieve them. Spain vows to eliminate the heretical influences attributed to Jews, Moors, and others who would taint the limpieza de sangre, purity of Spanish blood. At the insistence of his family, the handsome and charismatic Vicente enters the Dominican Order and is soon thrust into the scheming political hierarchy that rules Spain. As confessor to the king’s sister, the Infanta Doña María, and assistant to Philip’s chief minister, Olivares, Vicente ascends through the ranks and before long finds himself poised to attain not only the ambitious dreams of the Rocamora family but also—if named Spain’s Inquisitor General—to bring about an end to the atrocities committed in the name of the blood purity laws. The resourceful young man must survive assassination attempts from a growing list of ruthless foes in both Church and court, solve a centuries-old riddle to quell rumors of his own impurity of blood, and above all, suppress his love for the seemingly unattainable Doña María. 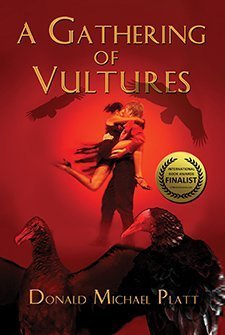 A Gathering of Vultures

Murder, mutilation, and carrion… in paradise? “There shall the vultures also be gathered, every one with her mate.” -ISAIAH 34:15. Professional ballroom dancers Terri and Rick Hamilton aspire to be world champions. Unfortunately, Terri’s recurring back and health problems place that goal well out of reach. They travel to Terri’s birthplace, Florianópolis, on the scenic island of Santa Catarina off the coast of Brazil to vacation and visit their best friends and mentors.
Along the picturesque beaches, dead penguins and eviscerated bodies wash up on the shores of paradise, and Antarctic blasts play counterpoint to the tropical storms that rock the island. The scenic wonder is home not only to urubús, a unique sub-species of the black vulture, but also to a clique of mysterious women who offer Terri perfect health and the promise of fame—at a terrible price.
Rick fears Terri is being drawn into a cult and that his own life may be in danger. Will it be too late when he discovers something even more terrifying lives beneath the tranquil, tropical veneer of the island? Idyllic one moment and nightmarish the next, you never know what you’ll encounter in the city of Florianópolis—murder, mutilations, carrion, or the lure of eternal youth.

“Discovering a truly different sort of horror novel is a rare pleasure… and cause for much rejoicing. Donald Michael Platt’s A Gathering of Vultures provides a glimpse of singular evil. Even the exotic Brazilian locale and the back story—involving competitive ballroom dancing—may be unique within the genre. This is the darkest of dark fantasies. Through fevered imaginings of the first rank, coupled to macabre yet erudite prose, Platt crafts an unusual and involving nightmare.” — Robert Dunbar, author of The Pines and The Shore