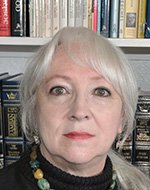 The Light and Dark Battle — Once her children were launched into the world, Chéri Vausé spent her time volunteering and teaching her favorite subject, theology using the Catholic Ladder as the form. At the end of twenty-five years devoted to her favorite subject, she began to turn to writing something other than scholarly essays on the exegesis of the scriptures with its mystical implications. From the Kabbalah and Aggadah to the Talmud, Vausé ventured from the heavily scholastic medium to mysteries, psychological suspense, and spy thrillers. Look for characters who have glimpses into the future, or a tug-of-war between good and evil, and you can’t help but know what sea Vausé came from. Though forays into the weird, such as her short-story, ZERO-SUM, can be found in 2019’s BOULD Awards, or BLACK MONDAY in the anthology DAY OF THE DARK: Stories of Eclipse from Wildside Press, Vausé shows her writing chops in other genres.

Researching World War II became a passion for Vausé as a teenager, with her father’s and uncles’ stories to bolster her desire to search for more, which led to uncovering the untold stories of the Cold War. Marrying a former submariner during the Cold War, who has many incredible tales of his own, she decided that the noirish world of that frigid time has never quite ended, and it became the backdrop of her latest novel, SHADOWS. Although set at the time of the War and projected into the sixties, the repercussions of that time have rippled off into the future. “The lies we were told about the Soviet Union in order to make us comfortable with adding their strength to the Allies of the War, continue to haunt us, and have created a cauldron of corruption and deceit we continue to face,” Vausé adds. “The after effects are worse than the war itself.”

Presently, Chéri Vausé lives on a small farm in Texas along with her husband, raising her ducks and dogs. 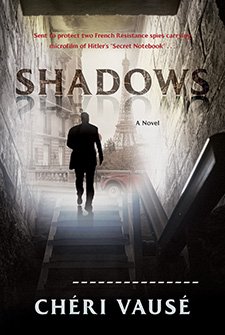 There is insanity in keeping secrets. So Aiden “Mac” McManus, a young Navy Underwater Demolition Team leader, believes when he is sent by World War II’s Supreme Commander, General Eisenhower, to protect two French Résistance spies carrying microfilm of Hitler’s Secret Notebook. It contains all the formulas and processes for advanced weaponry created by Nazi scientists. But the mission goes horribly wrong. Twenty-two years later, in a time of social unrest and homegrown terrorism, history repeats itself. Mac is tasked to take on the same evil he faced during the war, leaving his wife Esther and their child behind. But when Esther herself is targeted, their enemies just might find out the hard way that the female of the species can be more deadly than the male.