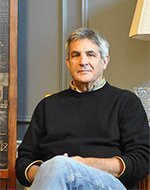 Charles Monagan has been a writer and editor since 1972, when he graduated from Dartmouth College. His work has appeared in many magazines and newspapers, and from 1989 to 2013 he was the editor of Connecticut Magazine. In 1997, he won the Gold Medal for Reporting from the national City and Regional Magazine Association. In 2012, he received the Connecticut Press Club’s Mark Twain Award for Distinguished Journalism, a lifetime award.

Monagan is the author of 10 books, including The Neurotic’s Handbook, The Reluctant Naturalist, and How to Get a Monkey into Harvard. Additionally, he wrote the book and lyrics for the musical Mad Bomber, which was produced in 2011 and won first place in the Academy for New Musical Theatre’s 2012 international Search for New Musicals.

Like many who grew up in Waterbury, Connecticut, Monagan became familiar with Carrie Welton’s name due to the presence of a striking drinking fountain for horses, topped by a life-size bronze stallion, known familiarly as the Carrie Welton Fountain. Much later, he became intrigued with the scant but colorful details of Carrie’s youth and her terrible death, and he took up the challenge of giving her a full life in fiction. Carrie Welton is Monagan’s first novel.

Monagan and his wife, Marcia, live in Connecticut. 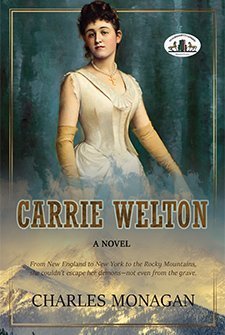 Eighteen-year-old Carrie Welton is restless, unhappy, and ill-suited to the conventions of nineteenth-century New England. Using her charm and a cunning scheme, she escapes the shadow of a cruel father and wanders into a thrilling series of high-wire adventures. Her travels take her all over the country, putting her in the path of Bohemian painters, poets, singers, social crusaders, opium eaters, violent gang members, and a group of female mountain climbers.
But Carrie’s demons return to haunt her, bringing her to the edge of sanity and leading to a fateful expedition onto Longs Peak in Colorado. That’s not the end, though. Carrie, being Carrie, sends an astonishing letter back from the grave and thus engineers her final escape—forever into your heart.