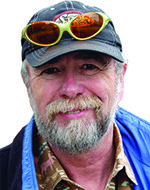 History with a Bite –Bruce Woods is a professional writer/editor with more than 30 years in magazine publishing, having worked as editor of Mother Earth News and Alaska Magazine, among others, and has published both nonfiction and poetry books. Prairie Schooner magazine featured his work in its “Writing from Alaska” issue. His Birdhouse Book, brought out by Sterling/Lark, is still in print and has sold more than 100,000 copies.

After leaving the editor’s position at Alaska Magazine in late 1998, Woods began a second career in External Affairs for the Alaska Region of the U.S. Fish and Wildlife Service. Eventually serving as the de facto writer/editor for the agency’s largest region, as well as providing information and an initial contact point for state, national, and international media on topics affecting Alaska’s often controversial wildlife and land management issues, Woods retired in the spring of 2013 in order to focus on fiction writing.

In addition to the Birdhouse Book referenced above, Woods has published three nonfiction volumes and several books of poetry with small presses. During his magazine editing career he also served as editor/contributor to numerous nonfiction volumes. Several of his essays have been anthologized, as well.

Woods currently lives in Anchorage, Alaska with his wife Mary and his two cats, Lucy Fur and Boswell. Gardening and bicycling (the latter usually upon a single-speed road bike named “Yellow Snow” that he built from an old track frame bought online) are chief among his many interests outside of reading and writing. He has two children, Ethan, who studied music composition at Bennington College and now resides in Asheville, N.C., and his daughter Alice, who recently graduated from Minneapolis College of Art and Design and currently lives in Minneapolis. 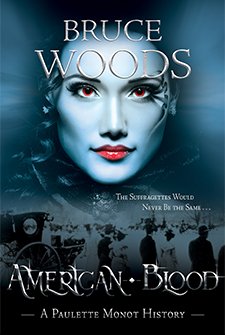 Hearts of Darkness Trilogy Book 3. Paulette Monot, vampire-adventuress, having survived the Matabele War in Africa, leaves England to travel in the opposite direction: to America, there to recuperate, make her fortune, and keep a low profile. So much for good intentions. When she finds herself strongly attracted to Lucy Burns, a young leader in the American movement for Women’s Suffrage and the right to vote, the best Paulette can hope for is one out of three. The women who dare to peaceably demand be treated as human beings under the law are being treated worse than the most violent offenders. And it isn’t just human anger and prejudice they must contend with. By the time Paulette figures out why disembodied, malevolent spirits are plaguing the suffragettes, it may be too late to save Lucy. On the other hand, Paulette, whose thirst for vengeance is at least as strong as her taste for alluring redheads, finally has a chance to hunt down her accidental maker—with or without the permission of the American vampire kin. American Blood, a stand-alone sequel to Royal Blood, is historical urban fantasy in which the actual events depicted are more horrific than the imagined supernatural elements. 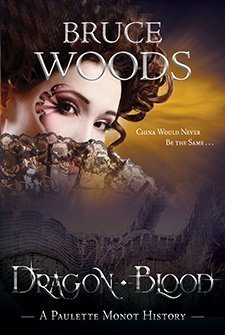 Hearts of Darkness Trilogy Book 2. Paulette is sent on a mission to China with the words of her mentor ringing in her ears. “A hot wind is now fanning the flames of racism in China, Paulette.” Said Lady Ellen Terry. “And, like dust in a drought, it has blown up an army. They call themselves ‘the boxers’ society of righteous and harmonious fists,’ or some variation thereof, and practice rituals that they claim bestow invulnerability and more. They are ill-armed and poorly trained but potentially numberless.”
She is to face great danger and the very real risk that despite her remarkable powers she will not survive. It will take skill and courage to avoid the multiple perils, and risk of exposure for what she really is, that await her in an increasingly turbulent China.”
“Recently an auxiliary movement has sprung up. Reportedly consisting of young virgin women, from the ages of 12 to 18 and accounted uncommonly beautiful. They carry the name “Red Lanterns,” and claim the powers of flight, fire-starting, and miraculous healing. It is these I wish you to investigate for any sign of Kindred activity.”

Hearts of Darkness Trilogy Book 1. Historical and fictional characters come together and change the future of Africa forever. Renowned actress Lady Ellen Terry, detective Sherlock Holmes, financier Cecil Rhodes, hunter/naturalist Frederick Courtney Selous, King Lobengula, and a mysterious, undead adventuress named Paulette Monot become chess pieces in the Great Game, which takes the form of Africa’s First Matabele War.
“It is unlikely that anyone will ever read this. In fact, if you are perusing these pages, and you’re not one of the Kin (“vampires” to the uninitiated), it is almost certain that there’s either been some sort of terrible mistake or that I (Miss Paulette Monot) have decided to take a mortal lover. The latter is perhaps more likely. Lucky you.”