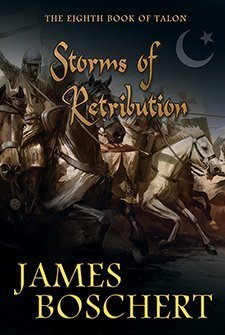 Tucson, AZ, USA — The 8th installation of James Boschert’s adventures of Talon, Reza, Rav’an, their friends, families and enemies, has a working title of The Storms of Retribution, and it is already with the editors.

Talon pledged his word of honor to return to Jerusalem and serve the Christian king Baldwin IV also known as the Leper King, once he found his beloved. Years have passed, years in which Talon struggled to find safe harbor for his growing family, still under the shadow of retaliation by the Old Man of the Mountain, Rashid Ed Din, who has neither forgotten nor forgiven the defiance of Talon and Rav’an; years in which the king in Jerusalem has died of his leprosy, and the kingdom has fallen into disarray. As lords and nobles vie with each other for dominance, Lord Raymond de Chatillon violates the standing treaty with the Arabs, his terrible acts and greed triggering a war of retaliation commanded by none other than the redoubtable and enraged Salah Ed Din. But a promise is a promise, and the one man of honor left in Christian Jerusalem, Raymond of Tripoli sends for Talon, obliging him to keep his word and help save the them from Saladin’s army — and each other.

Even though he knows it means sailing into deadly danger, even through it means leaving his family to risk the predations of pirates and the unhinged ruler of Cyprus, Isaac Komnenos, even though he realizes that not a single one of the lords squabbling for control of the Crusader states will be glad to see him, Talon sets forth for The Kingdom, accompanied by Reza his long time comrade in arms.

What Talon doesn’t know is that word is out that he has left his stronghold in Cyprus, and at long last the assassins know when and where to strike to effect their complete revenge.

If the editors give the next draft their seal of approval, Penmore hopes to see The Storms of Retribution in print and available for eBook purchase by the end of December or early January, in time for the 12 Days of Christmas.