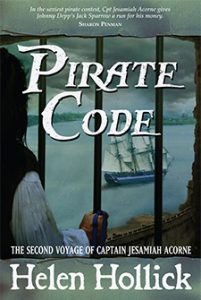 Pirate Code. Voyages of Captain Jesamiah Acorn Book 2. Ex-pirate Captain Jesamiah Acorne is in trouble. Big trouble. All he wants to do is marry his girl, Tiola Oldstagh, and live contented aboard his ship, Sea Witch, but Tiola’s husband refuses to grant her a divorce unless Jesamiah retrieves some barrels of indigo and smuggles them out of the Spanish-held Caribbean island of Hispaniola. The Governor of Nassau wants Jesamiah to go there too, to assist in starting a rebellion, and Captain Henry Jennings wants him to find a lost spy. Add to that, Tethys, the spirit of the sea, wants Jesamiah for her own and sets her daughter, Rain, to go fetch him. To cap it all, Commodore Vernon of the Royal Navy wants to expand his fleet and craves to own Sea Witch for himself. As Jesamiah’s hopes for a quiet life tumble about him, the onset of war with Spain scuppers everyone’s plans. Intrigue, fights, romantic passions and trouble follow Captain Acorne like a ship’s wake–not the ideal for a quiet life, and not Jesamiah’s idea of the rules of the Pirate Code.