New Review: A Sloop of War by Philip K Allan 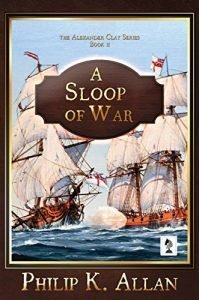 Cindy Vallar of Privates and Privateer Blog has posted a detailed and engaging review of Philip K Allan’s A Sloop of War, the second novel in theAlexander Clay Series of nautical fiction.

“A Sloop of War is a fast-paced nautical adventure interwoven with land and sea actions, as well as civilian, political, and historical elements. Alexander Clay may be the main character of this book, but Able Sedgwick is a likable fellow who easily takes center stage more than once. His integration into the crew deftly shows life in the Royal Navy, while at the same time demonstrating both acceptance and prejudice among a cast of characters where each is uniquely drawn and rarely stereotypical. The energy in the confrontation between Windham and Clay feels like being shocked by static electricity. Several scenes are laced with humor, and the wonderfully descriptive comparison in the final engagement perfectly allows readers to imagine what is unfolding. Fans of nautical and naval fiction will enjoy this second entry in the series and will look forward to the next phase in Alexander Clay’s career and love life.”