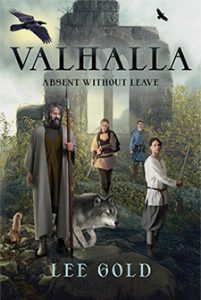 Tucson, AZ, USA — Penmore Press is pleased to announce the release of Valhalla: Absent Without Leave by Lee Gold.

Valhalla: Absent Without Leave
“An axe age, a sword age,” Bookwyrm chanted.
“A wind age, a wolf age.”
“Brothers shall fight and slay each other,” sang Knut.
“Garm howls in Hel, and the wolf runs free.”

Robin Johnson died a hero’s death, rescuing people from a hospital during a California earthquake. So how is a hero rewarded? Robin finds herself not in Christian Heaven but in Valhalla of Norse myths, welcomed by heroes and the guardians of Asgard. But Robin had been something of an oddity in life and continues to be so in the afterlife. She’s not content to spend the better part of eternity feasting and fighting and… drinking to Odin’s honor. Accompanied by two fellow heroes, a wolf, a telepathic sword and a chatty red squirrel, the renamed Robin Grima sets out to prevent Ragnarok, the doom in which nearly all the Asgardians die. Their first quest: slay the dragon Nidhog, who gnaws away at the root of Yggdrasil, The World Tree. If they succeed in that, they can confront sea giants, hill giants, mist elves, Fenris Wolf, the Midgard Serpent, and Hel, corpsequeen of the dead. But the only way to really stop Ragnarok is to deal, once and for all, with the mastermind of plots and Odin’s foster-brother — Loki himself.