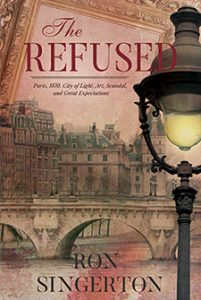 Tucson, AZ, USA — Penmore Press is pleased to announce the release of The Refused by Ron Singerton.

The Refused. Paris! 1861, City of light, art, scandal and great expectations, where extreme wealth rubs against raging poverty, with insurrection roiling beneath the surface. In the United States, the war of 1861-65 destroys families and communities. Three survivors decide to leave behind the ruins of their former lives. Union cavalryman and aspiring artist Jack Volant, a survivor of Gettysburg, sails to Paris to pursue his artistic vision. Charlotte Stuart, herself a talented sculptress, and her half-brother Jerome turn their backs on a scorched plantation and intractable prejudice. Charlotte becomes a favorite of Empress Eugenie, wife of Emperor Louie Napoleon and a renowned patron of artists, while Jerome joins forces with revolutionaries. Eventually, Charlotte is able to introduce Jack to Les Refusés—the French Impressionists whose avant garde styles are deemed unacceptable by French jurists. For a little while, Jack is able to forget the horrors of war, painting alongside Monet, Pissarro, Cézanne, Degas, and Manet. Elsewhere in the city, Jack’s disreputable brother Marcel profits from the sale of Egyptian artifacts of dubious origin. But in 1870, everything changes. A spirit of revolution sweeps through the city like a wild fire, and the disastrous Franco-Prussian war reduces Paris to a city under siege where starvation rules.