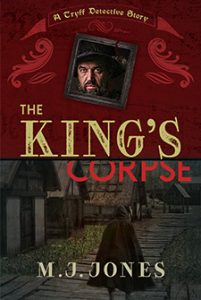 Tucson, AZ, USA — Penmore Press is pleased to announce the release of The King’s Corpse by M.J. Jones.

The King’s Corpse. M.J. Jones brings a hilarious detective story from the Dark Ages into the light of day. Our disreputable hero following his grubby profession lead us on a merry chase around the English and Welsh countryside. His name’s Tryff, he comes from Wales, and he steals saints for a living. Used to, anyhow. But everybody in England’s got to have a lord, so Tryff’s become radman, mounted protection (and general dogsbody) for the abbess of a little country convent. She sends him to find the missing body of her cousin Edward, the probably murdered king of England. It’s a nigh on impossible job, but he takes it because he needs the money to buy his mother out of slavery. Tryff’s confronted with a vicious royal court, a double-crossing bard, and a revolting waker-of-the-dead. They rout him completely. Now he must look for the king’s body in Wales. With but three English nuns for help, Tryff sets off to track down not only the king’s body but also his mother, the Great Harp of King Arthur, and love besides.