NEW RELEASE: The Journey of an Invisible Woman by Sandra Camillo 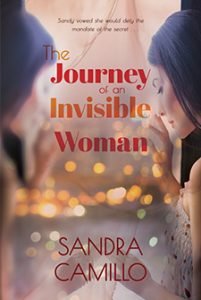 Tucson, AZ, USA — Penmore Press is pleased to announce the release of The Journey of an Invisible Woman by Sandra Camillo.

The Journey of an Invisible Woman. When she was a young girl, Sandy Camillo’s mother told her a secret. That secret was that one day she and all of her friends would become “invisible” women. Her mother’s words horrified Sandy, and she vowed that she would defy the mandate of this secret. The Journey of an “Invisible” Woman recounts stories of how Sandy and women of many generations struggled to overcome stereotyping and societal barriers erected to keep them in their “place”, to keep them invisible and silenced. She invites readers to accompany her on this journey of confronting biased gender norms, becoming visible, and finding a voice.

“The Journey of An “Invisible Women” is filled with many great moments and insights (‘… because of my children, the story of my life would never be forgotten’) The two great questions we each ask during life’s journey:  Did it matter that I was here?   Did I leave it better than I found it? For Sandy Camillo, the answers are “YES”. I’m glad this “invisible woman” told her story.  Honest, filled with the details of a life well lived, constant chapters of self-discovery and determination.   All told in an entertaining style sparking wry nods of understanding and laugh out loud moments. An enjoyable read.  Get to know this woman.” —ROBERT G. ROMASCO, AARP, President, and Chief Volunteer Spokesperson

“Sandy Camillo paints engaging vignettes in The Journey of An Invisible Woman. The resulting portrait highlights her talents in achieving both professional and personal success. She found the courage to go after her dreams no matter whether she landed in Dallas, St. Louis, or New York City.  She took risks and embraced many opportunities in education and in community life. She inspired her four children and her husband with her warm heart and her creative spirit. She is not the Invisible Woman she feared she might become.” —JUDGE KATHRYN BRAEMAN, Administrative Judge, US Department of Justice, US Senate, US Department of Defense

“Sandra Camillo’s book is a unique document. It beautifully describes her journey through life developing her unique talents and skill sets. It is a book about the development of self, and the realization of goals and missions. It is a story about becoming a person and being heard and respected in the world. Life is riddled with adversity and challenge. Ms. Camillo has spent her life gaining mastery by virtue of her courage, tenacity, and creativity. Her work will, and can, inspire woman of all ages across all cultures!” —CHRISTOPHER BAYER , author of 4 books series on neuroeconomics: Mastering the Moneyed Mind

“Sandy Camillo wanted what the women’s liberation movement promised: meaningful work, a family, personal fulfillment. Then she banged into the sexism, ageism, and misogyny that hold every ambitious woman back. She reeled, she reckoned, she fought (spoiler alert: she took the toaster), and eventually she found her way. This provocative book will resonate with every woman who’s dreamed of “having it all” and refused to settle for crumbs.” —ASHTON APPLEWHITE,  American activist, TED speaker, and author of several books, including This Chair Rocks: A Manifesto Against Ageism