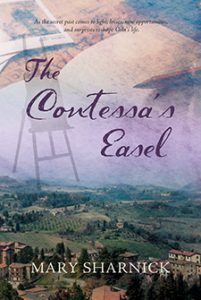 Tucson, AZ, USA — Penmore Press is pleased to announce the release of The Contessa’s Easel by Mary Sharnick.

The Contessa’s Easel. The acclaimed Orla Paints Quartet continues! “I know you never knew your grandfather, but now you can touch what his hands touched and create beauty…. Be like him, dearest Orla; recognize, make, and be beauty in an often ugly world.” These words were to have a profound effect upon Orla. Orla Castleberry returns to her New Orleans home after a year as artist-in-residence at Manhattan’s New York University. Her topical exhibit “Portraits of AIDS” has earned world-wide praise and notoriety for its realistic representations. Orla prepares for her next exhibit, to be held in Fiesole, Italy, in celebration of the forty-fifth anniversary of the town’s liberation from Nazi occupiers. The portraits she paints will also be featured at a premier book launch for The Orphans of Fiesole, written by her friend, immigration attorney and historian Tad Charbonneau. The book is based on letters and photographs composed by Orla’s own grandfather, so the project becomes intensely personal. Orla takes to heart the words of William Faulker: “The past is never dead. It’s not even past,” as tragedy, loss, and surprises transform the lives of her friends and family, even before she boards the plane for Italy. It isn’t only Orla’s understanding of the past that changes, however. Her future, too, will change remarkably. For years, Orla has sidelined her longings in order to be and do what others needed from her. Now, her love for the truth of art is leading her to discoveries of love.