NEW RELEASE: Silent From the Shadows by Craig Godfrey 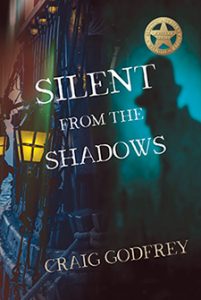 Tucson, AZ, USA — Penmore Press is pleased to announce the release of Silent From the Shadows by Craig Godfrey.

Silent From the Shadows. The Van Demonian Sleuth Casper Hunter Series. Nineteenth century Van Demonian sleuth, Caspian Hunter, is a lawman deeply immersed in the life and crimes of Hobart Town, where convicts transported from Mother England form a majority of the population. Caspian and his decidedly unconventional associates are sworn to uphold the law where lawlessness is almost a way of life. In this colony on the very edge of the vast British Empire maintaining law and order is no simple task. It’s 1858 and free settlers are arriving in greater numbers as ships arrive in Hobart Town’s beautiful deep-water harbour. There are whalers making fortunes from their grisly trade and thriving merchants. The economy is booming, bringing with it taverns, enterprising ladies and the riff-raff of the empire searching for a better life – or somewhere to hide. Mysterious murder victims appear around Hobart Town with inexplicable puncture marks to their throats. ‘Vampires!’ the ignorant rant as anarchy threatens the island. Meanwhile Caspian Hunter is under increasing pressure to solve the murders – pressure from everyone from the Governor to the poor and illiterate who he has chosen to protect.