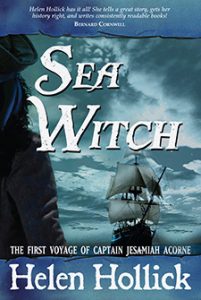 Sea Witch. Voyages of Captain Jesamiah Acorn Book I. The Time: The Golden Age of Piracy – 1716. The Place: The Pirate Round – from the South African Coast to the Caribbean. Escaping the bullying of his elder half-brother, from the age of fifteen Jesamiah Acorne has been a pirate with only two loves – his ship and his freedom. But his life is to change when he and his crewmates unsuccessfully attack a merchant ship off the coast of South Africa. He is to meet Tiola Oldstagh an insignificant girl, or so he assumes – until she rescues him from a vicious attack, and almost certain death, by pirate hunters. And then he discovers what she really is; a healer, a midwife – and a white witch.
Tiola and Jesamiah become lovers, but the wealthy Stefan van Overstratten, a Cape Town Dutchman, also wants Tiola as his wife and Jesamiah’s jealous brother, Phillipe Mereno, is determined to seek revenge for resentments of the past, a stolen ship and the insult of being cuckolded in his own home.
When the call of the sea and an opportunity to commandeer a beautiful ship – the Sea Witch – is put in Jesamiah’s path he must make a choice between his life as a pirate or his love for Tiola. He wants both, but Mereno and van Overstratten want him dead. In trouble, imprisoned in the darkness and stench that is the lowest part of his brother’s ship, can Tiola, with her gift of Craft and the aid of his loyal crew, save him? Using all her skills Tiola must conjure up a wind to rescue her lover, but first she must brave the darkness of the ocean depths and confront the supernatural being, Tethys, the Spirit of the Sea, an elemental who will stop at nothing to claim Jesamiah Acorne’s soul and bones as a trophy for herself.