NEW RELEASE: Ripples in the Sand by Helen Hollick 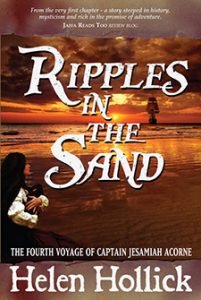 Tucson, AZ, USA — Penmore Press is pleased to announce the release of Ripples in the Sand by Helen Hollick.

Ripples in the Sand. Voyages of Captain Jesamiah Acorn Book 4. Approaching England’s North Devon Coast Captain Jesamiah Acorne is worried. A Royal Navy frigate is trailing in his wake and Sea Witch has a hidden cache of brandy and indigo aboard. His instinct is to hoist full sail and flee, but he cannot attract attention, for his wife, Tiola, is ill and getting worse. She says the sea is affecting her, but Jesamiah has never seen seasickness like this before – is it something worse; something to do with her being a white witch perhaps? Like an approaching storm, his worries get deeper, darker and more sinister. Tiola’s brother, Ben, is in gaol, arrested for smuggling. At a loss of how to help him, opportunity comes in the unexpected form of Sir Ailie Doone – the last of the notorious Doone family of Exmoor. He offers Jesamiah a highly secret but lucrative commission to go to Spain and bring back to England a man who will lead a Jacobite rebellion. It seems an ideal solution, but first Jesamiah must break young Ben out of gaol. Once escaped from the threat of the gallows, the boy can sail with Jesamiah on the Sea Witch leaving Tiola ashore to recover in peace. Except, being captured and interrogated by the Spanish and meeting with an old friend, the beautiful English spy Francesca, is not part of Jesamiah’s plan. Once again he is in danger of losing his fidelity, his freedom and maybe even his life. Tiola meanwhile, has her own fears to face. Why is the ethereal spirit of the sea, Tethys, so determined to have Jesamiah for her own? To save him, Tiola must find a way to recall her previous lives and discover why events of the past have influenced the hatreds of the present. Like ripples in the sand blending together when disturbed, she must influence the fragile ripples of time . . .