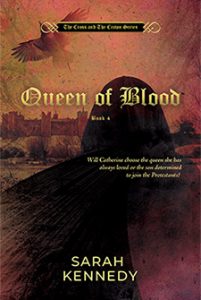 Tucson, AZ, USA — Penmore Press is pleased to announce the release of Queen of Blood by Sarah Kennedy

Queen of Blood. Book Four of the Cross and the Crown series, continues the story of Catherine Havens, a former nun in Tudor England. It is now 1553, and Mary Tudor has just been crowned queen of England. Still a Roman Catholic, Mary seeks to return England to its former religion, and Catherine hopes that the country will be at peace under the daughter of Henry VIII. But rebellion is brewing around Thomas Wyatt, the son of a Tudor courtier, and when Catherine’s estranged son suddenly returns from Wittenberg amid circulating rumours about overthrowing the new monarch, Catherine finds herself having to choose between the queen she has always loved and the son who seems determined to join the Protestants who seek to usurp her throne.