NEW RELEASE: Lieutenant James Lockwood at the Battle of Waterloo by Mark Bois 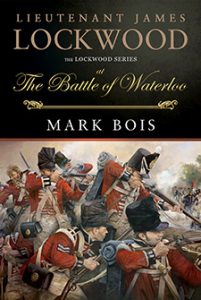 Tucson, AZ, USA — Penmore Press is pleased to announce the release of Lieutenant James Lockwood at the Battle of Waterloo by Mark Bois.

Lieutenant James Lockwood at the Battle of Waterloo. The Lockwood Series. “Captain Barr desperately wanted to kill Lieutenant Lockwood. He thought constantly of doing so, though he had long since given up any consideration of a formal duel. Lockwood, after all, was a good shot and a fine swordsman; a knife in the back would do. And then Barr dreamt of going back to Ireland, and of taking Brigid Lockwood for his own.” So begins the story of Lieutenant James Lockwood, his wife Brigid, and his deadly rivalry–professional and romantic–with Charles Barr. Lockwood and Barr hold each other’s honor hostage, at a time when a man’s honor meant more than his life. But can a man as treacherous as Charles Barr be trusted to keep secret the disgrace that could irrevocably ruin Lockwood and his family? Against a backdrop of famine and uprising in Ireland, and the war between Napoleon and Wellington, showing the famous Inniskilling Regiment in historically accurate detail, here is a romance for the ages, and for all time.