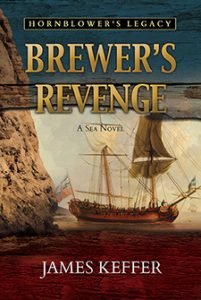 Brewer’s Revenge. Admiral Horatio Hornblower has given Commander William Brewer captaincy of the captured pirate sloop El Dorado. Now under sail as the HMS Revenge, its new name suits Brewer’s frame of mind perfectly. He lost many of his best men in the engagement that seized the ship, and his new orders are to hunt down the pirates who have been ravaging the trade routes of the Caribbean sea. But Brewer will face more than one challenge before he can confront the pirate known as El Diabolito. His best friend and ship’s surgeon, Dr. Spinelli, is taking dangerous solace in alcohol as he wrestles with demons of his own. The new purser, Mr. Allen, may need a lesson in honest accounting. Worst of all, Hornblower has requested that Brewer take on a young ne’er-do-well, Noah Simmons, to remove him from a recent scandal at home. At twenty-three, Simmons is old to be a junior midshipman, and as a wealthy man’s son he is unaccustomed to working, taking orders, or suffering privations. William Brewer will need to muster all his resources to ready his crew for their confrontation with the Caribbean’s most notorious pirate. In the process, he’ll discover the true price of command.