NEW RELEASE: His Most Italian City by Margaret Walker 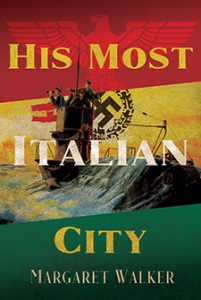 Tucson, AZ, USA — Penmore Press is pleased to announce the release of His Most Italian City by Margaret Walker.

His Most Italian City. Trieste, once the port of the Austro-Hungarian Empire, has become Italian. As fascism strives violently to create a pure Italy along its streets, Matteo Brazzi is forced to choose his loyalties with care. When his office is bombed, the police are baffled, but Brazzi knows who committed the crime, and he knows why.

Though he is no seaman, he can easily identify the dark shape that disappeared into the Gulf of Trieste that dramatic night and, as he escapes to Cittanova in Istria, the mysterious vessel follows him down the coast. Brazzi has successfully exploited fascism to protect himself—many people would call him a traitor—but he’s only ever had one real love. Now Nataša is dead and Brazzi owes his share of the blame. Too soon he discovers that not even Mussolini can save him from an enemy who is bent on revenge.