NEW RELEASE: Epitaph for a Dream by Terry Mort 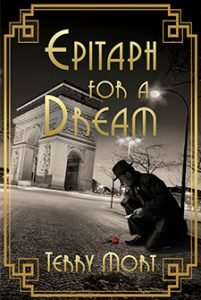 Tucson, AZ, USA — Penmore Press is pleased to announce the release of Epitaph for a Dream by Terry Mort.

Epitaph for a Dream. The eve of World War Two. A Hollywood producer’s murdered wife. Her husband’s guilty memory of a shipboard romance. A stolen painting signed “Picasso.” French gangsters. A beautiful courtesan. A shootout in a brasserie. All of these and more confront Private Detective Riley Fitzhugh, as he travels from Hollywood to the Riviera, Paris and London, in search of his client’s vanished Dream Girl—as well as some answers: Was the painting a genuine Picasso, or just a clever forgery? Who was responsible for the corpses that kept littering his path and complicating the investigation? And whatever happened to Amanda Billingsgate?