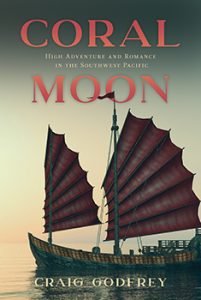 Coral Moon. Samoa, 27, arrives in Cook Town to charter a boat to take her to Mist Island in the Solomon’s searching for her younger brother, Rennison, whom she has not heard from in fourteen months. In his last letter he was with Lutheran missionaries. He requested five hundred bibles sent from a Sydney. Samoa hires Tatsuo Gaston (Japanese-Frenchman) and his cutter the Mystery. At Mist Island the brother has moved on following rumours of a lost Chinese junk with gold aboard taken from Queensland goldfields. But Rennison harbours dark secrets. He’s associated with the Germans infiltrating the Pacific. Meanwhile the Royal Navy pursues the Mystery on gunrunning charges. The weeks progress, and Samoa and Tatsuo fall in love. Rennison is discovered marooned on the Shoal of Ghosts off Malaita. Rescued, Rennison leads the Mystery to Half Moon Reef where the Chinese junk was lost twenty years earlier, but more recently it was identified as wreckage exposed when a tsunami withdrew over the reef. Those aboard the Mystery overcome headhunting savages before Tatsuo, a hardhat diver, dives for the gold, retrieving much of it. However rival pearler, Captain Bligh of the Beacon and the German Navy have other plans.