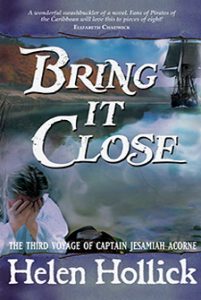 Tucson, AZ, USA — Penmore Press is pleased to announce the release of Bring It Close by Helen Hollick.

Bring It Close. Voyages of Captain Jesamiah Acorn Book 3. Too much trouble has come too close! Jesamiah Acorne, Captain of the Sea Witch, has accepted a government-granted amnesty against his misdeeds of piracy, but old enemies do not forget the past. In particular Edward Teach – Blackbeard himself – has a bone to pick with Acorne. Following an indiscretion with an old flame, Jesamiah finds his fiancée, the midwife and white witch Tiola Oldstagh, has gone to North Carolina to help with a difficult birth. The problem; that is where Blackbeard now resides. He mustn’t discover that Tiola is Jesamiah’s woman. She will have to hide her identity and her gift of Craft from the black-hearted pirate who has sold his soul to the devil. With Sea Witch damaged and himself wounded, Jesamiah has to take stock of his situation, but arrested for acts of piracy how is Jesamiah Acorne to clear his name, overturn a sentence of hanging, keep Tiola safe, put an end to Blackbeard and deal with being haunted by the ghost of his father? Bring It Close moves from the Bahamas to North Carolina and Colonial Williamsburg in Virginia at a swashbuckling pace. There is intrigue, misunderstanding, romance and adventure all wrapped up in a blend of mystical fantasy.