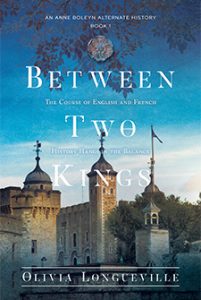 Tucson, AZ, USA — Penmore Press is pleased to announce the release of Between Two Kings by Olivia Longueville.

Between Two Kings. Anne Boleyn is imprisoned in the Tower of London on false charges of adultery, high treason, and incest on the orders of her husband, King Henry VIII of England. Providence intervenes – she escapes her destined tragedy and leaves England. Unexpectedly, she saves King François I of France, who offers her a foolhardy deal, and Anne secretly marries the French monarch. With François’ aid, she seeks vengeance against the English king and all those who betrayed her and designed her downfall in England. Henry must face the deadly intrigues of his invisible enemies, while his marital happiness with his third queen, Jane Seymour, is lost and a dreadful tragedy also strikes the king. The course of English and French history hangs in the balance. From the gloomy Tower of London to the opulent courts of England, France, and Italy, brimming with intrigue and danger – Anne Boleyn survives, becoming stronger and wiser, and fights to prove her innocence. Her hatred of Henry is inextricably woven into her existence.