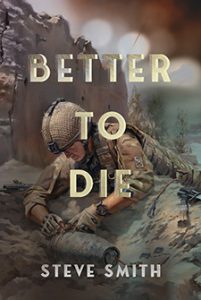 Tucson, AZ, USA — Penmore Press is pleased to announce the release of Better to Die by Steve Smith.

Better to Die. 1996: Sergeant Nick Adair defends British Army border post “Hotel 55” from being overrun by the IRA, but the only witnesses to his bravery tell a different tale, with themselves as heroes and Adair castigated as a coward.
2021: After a five-year stint with the French Foreign Legion, Jack Adair is determined to have a career as a Sandhurst officer, preferably in his father’s old regiment, the King’s Royal Rangers. But the KRR considers itself elite, professionally and socially, with scant room for a rough diamond like Adair. Cadet Vyvyan Phillips is more the thing: younger son of General Philips, the decorated hero of the Hotel 55 incident. The General’s reputation shines so brightly, it blinds everyone but Jack to Vyvyan’s incompetence. The rivalry between Adair and Phillips extends beyond the confines of training and field command. Both take a keen interest in fellow officer Gemma Page, of Intel Corps. And then the battalion deploys to Gaziantep.