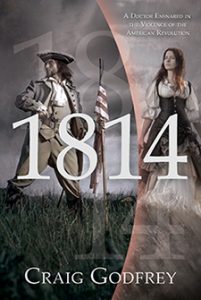 Tucson, AZ, USA — Penmore Press is pleased to announce the release of 1814 by Craig Godfrey.

1814. 1814 is a tale of two hemispheres and a man and a woman who initially shared little but the English language. Of a man of peace–a doctor–ensnared in the violence of the American Revolution, forced to flee the former American colonies of King George III. Of a very young woman fighting for survival amid the injustice, poverty, and corruption of early Nineteenth-Century Britain. A woman who is unjustly sentenced to trans- portation to Van Diemen’s Land. British ‘justice’ was harsh beyond belief at this time and at its worst in its treatment of female convicts. At this point in history, Britain and particularly the Royal Navy were all-powerful and the American doctor sought anonymity under a new identity. He ‘signed on’ with a group of sealers who had their own notorious empire in the remote islands of Bass Strait. These sealers, to this day, are recognized as the most evil of men. It is in this lawless world that two good people meet.