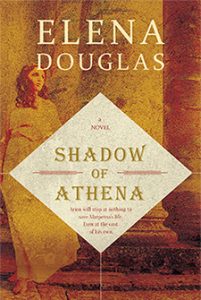 In ancient Troy, young maidens from afar are chosen by lot to serve as slaves in Athena’s temple for a year. Such is the unfortunate fate of sixteen-year-old Marpessa of Lokris in Shadow of Athena, who embarks on a journey that challenges her life. Accompanying her is the slave Arion who escorts her to her new life, escapes slavery himself, and lingers to help her when Troy is overcome by barbarians, sparking another journey for the two.

But with the temple of Athena destroyed, Marpessa, whose life has been sworn to the goddess, is adrift, with no way to return home. And Arion feels his life has devolved into an empty, meaningless struggle to survive. Can two lost souls who want something more and different from their lives become united over a goal that seems to defy their separate destinies?

Shadow of Athena excels in exploring the social, political, and religious flavors of the times as cruel oligarch Klonios searches for a way of achieving his heart’s desire (Marpessa) despite her newfound obligations and her struggles against his power.

Schemes and dreams swirl around the beautiful girl as she examines her own heart’s desires and the course of her life during the course of an arduous journey that changes everything.

Author Elena Douglas has done a fine job of researching ancient history and mythology surrounding Athena the goddess and events in Troy to blend them into a riveting story line powered by a feisty female protagonist, a strong, resourceful hero, and their struggles against the inimical forces of man and nature.

From their encounters with the sailing Phoenicians to the evil machinations of a vengeful villain, and in the end a mother charged with protecting them both against all odds and tradition, Douglas crafts a story that weaves Trojan events and atmosphere into a compelling tale replete with nonstop action and intrigue.

Readers seeking an adventure story nicely grounded in historical research, early Greek history, and the evolving love between two very different young people will find Shadow of Athena compelling, educational, and filled with real notes about what is known about the annual ritual of the Lokrian maidens in a world where goddesses, curses, and fate flourish.