BOOK REVIEW: The Dragon’s Breath by Pirates and Privateers 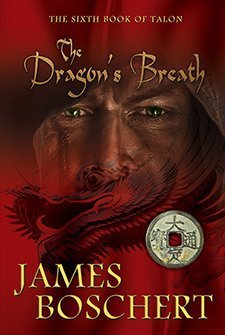 “. . . readers will find The Dragon’s Breath rewarding, spellbinding, and an excursion not to be missed.”

Still hunted by his beloved’s brother, Master of the Assassini, and a sultan thwarted from marrying Rav’an, Talon de Gilles takes her and his newly-met son, Rostam, to Oman. There lives a man Talon once saved from an executioner’s sword, one who may be able to help the fugitives resettle in a new land. Accompanying them on this journey is Reza, Talon’s brother-in-arms and fellow fugitive from the Assassini, as well as another woman rescued from the sultan’s harem.

The day Talon arrives in Oman, Allam al Mardini celebrates his victory against an arch rival. His camel, Jasmine, has won the most prestigious race of the year. He welcomes Talon into his home, even though five months have passed since they were imprisoned together. He knows well that although Talon claims to be a merchant, his friend is far more than that. Talon soon discovers that he and Allam’s family have similar interests – merchant ships and a good game of Chogan. Talon is invited to play, but one of their opponents is the man bested in the camel race. After a failed attempt to inflict a fatal injury and a second loss to Allam’s family, Nejem al Khulood vows vengeance – a pledge that necessitates Talon’s and Reza’s intervention after Jasmine disappears.

Knowing of Talon’s interest in his family’s ships and journeys, Allam intercedes with his brothers and father and they provide their new friend with guidance in purchasing a new vessel and in journeying to Africa, Al Hind, and China. But such voyages are rarely without perils, as Talon, Reza, and their families soon discover. A sick woman in their first port of call soon leads to mobs trying to flee rumors of plague. When illness sweeps through the brothers’ ships, Talon must continue onward into unknown waters. The sighting of three sails announces the arrival of pirates too numerous to defeat in hand-to-hand combat; surprise is Talon’s only option, yet it offers a slim chance of survival.

In the midst of a vicious storm a foundering ship, showing signs of a fire and no crew, demands a daring rescue to save the four people still aboard. The gamble pays off in unexpected ways, since one of those saved is Lord Meng Hsü who was returning home from a mission to India on behalf of Guangzhou’s governor. Talon is intrigued by his guest and his country, but as tantalizing as a visit to China might seem, it must wait for another day . . . until a cruel and dictatorial ruler on an island off the Malay peninsula attempts to maneuver Talon into selling his cargo at a loss. But China is a land of strange customs and political maneuverings, where death is but a whisper away.

The Dragon’s Breath is the sixth entry in the Book of Talon series, and it is rife with roller-coaster adventure, exotic locales, and breathtaking jeopardy. Boschert spins a compelling tale with subplots intricately interwoven to create the finest silken tapestry. His knowledge and research of the various cultures transport readers back to the twelfth century, where the intoxicating allure and inevitable reality place readers in the midst of ambition, intrigue, jealousy, espionage, greed, betrayal, and survival. Talon and Reza come close to meeting their match when they tangle with eastern pirates, as well as a new and formidable group of assassins, the Ninja. There is even a quest to find a dragon, which matches the serpentine curves of that legendary creature and inserts a bit of levity into a story where it’s difficult to determine just who can be trusted. Whether new to Talon and his journeys or a longtime fan, readers will find The Dragon’s Breath rewarding, spellbinding, and an excursion not to be missed.