BOOK REVIEW: The Distant Ocean by the Historical Novel Society 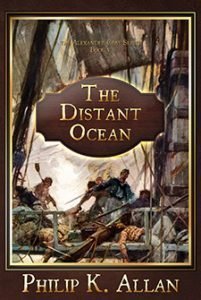 “Well researched, its use of naval jargon is spot-on, and the novel provides an insight into the below-deck atmosphere along with those stationed on the command deck.”

After the Battle of the Nile in 1798, Captain Alexander Clay of the frigate Titan was ordered to join a small fleet and sail to the Indian Ocean. French ships are attacking English merchant ships heading back to England. He soon learns he must deal with a treacherous English captain who is out to discredit him, along with his friend, Captain Sutton, in command of the frigate Rush. A few years earlier, the uncle of Captain Windham of the frigate Echo was killed during a sea battle, and Windham blames them for not rescuing his uncle prior to his death.

This is Book V in the Alexander Clay Naval Adventure series. This is the first book I have read in the series so I can attest that this book can stand alone. I have read many well-written naval adventure books on the market and I feel this series can join the others in excitement and accuracy in describing the battles. Well researched, its use of naval jargon is spot-on, and the novel provides an insight into the below-deck atmosphere along with those stationed on the command deck. The drama and action portrayed on each page compelled me to continue reading to the conclusion.