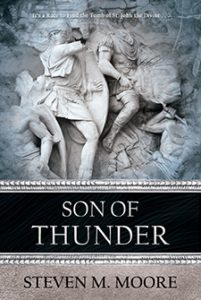 “Moore’s deft interweaving of history, religion, fable and fact makes for a fascinating read, highly recommended for readers who favor a thriller that makes them think beyond the page.”

Practiced mystery author Steven M. Moore creates three tales in one, from different historical plateaus, blending elements of a modern thriller with myth and fact from two earlier centuries in his newest offering, Son of Thunder.

The stories open as painter Sandro Boticelli presents to his patron Lorenzo de Medici his latest creation – untitled – depicting the New Testament Zebedee and his two sons James and John, the latter definitely resembling the artist. When Lorenzo spurns the unusual painting, Bishop Leo steps in and makes Boticelli an offer he can’t refuse. Once he has possession of Boticelli’s creation, Leo hides it away in an armoire along with some cryptic notes regarding the true burial site of John, whom Jesus named a “son of thunder.” Next we find John, in the first century; he’s fleeing the violence of the Romans against Christians by traveling furtively through Europe, calling on Mary the mother of Jesus, who is on her death bed, and Mary, known as the Magdalene, who, like John, is boldly attempting to preserve relics of their Master’s life and teaching.

Skipping to the twenty-first century we meet Esther Brookstone, a retired operative from Scotland Yard’s Art and Antiques Division, and her male companion, Bastiann van Coevorden, an Interpol agent. The two have just spent some quality time together in her newly renovated castle and both are, secretly, considering the possibility of marriage. Through her contacts in the art world, Esther authenticates the Boticelli painting once hidden away by Bishop Leo, and discovers his arcane notes concerning the grave of St. John. These will lead her, Bastiann, and a varied cast of characters – with a wide, sometimes nefarious mix of motives and methods – on an international chase to a faraway place where sacred bones are buried.

Moore has written about Esther and Bastiann previously; the interest about and between the two is deepened in this latest exploration of their vibrant partnership. Though Esther seems at times the more assertive of the two and quite capable of taking care of herself, she needs someone like Bastiann — a plodder, an observer, and a good man to have on one’s side when the chips are down. Moore offers an abundance of stirring intrigue related to the current political climate, against a background of historical speculation. Terrorism and its foes play a role, and a weirdly motivated descendant of one of the ancients joins in the fray. Moore has included an afterword he calls “Notes, Disclaimers and Acknowledgements” that sheds light on the lure for him of this multilayered, twisting tale.