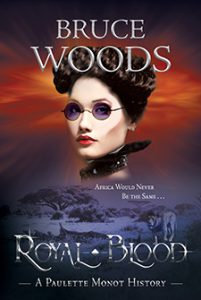 “. . . an eerily enjoyable mix of romance, danger, vampire love and lore, 19th century colonialism, and a thoughtful look at Africa.”

A strangely gifted, eerily elegant young female joins forces with a well-known literary character and some historical figures to play her part in Africa, and war, in this well-honed fantasy by author Bruce Woods.

Paulette Monot is an American, a lady of sorts, a world traveler, and…a vampire, one of the “kin” whose numbers are unknown, but who, she will learn, are as populous in Africa as in Europe and America. She will make this discovery at the behest of none other than colonialist Cecil Rhodes. Rhodes is in London plotting with the legendary if fictional investigator Sherlock Holmes, and, importantly, with Ellen Terry, the celebrated actress who, it seems, is also one of the kin. Terry has shared a friendly quaff of hot blood with Monot as a way of welcoming her to London, and all involved are aware that the two females are indeed among the undead. Monot is asked to trek to southern Africa, locate more of her vampire kin, and organize them to aid Rhodes in quelling a rebellion being fomented by Lobengula, Chief of the Matebele. Lobengula has no firepower, but can command vast numbers of warriors to subdue a small garrison of British soldiers. Monot accepts the challenge and travels to Africa partly by newly devised airship, taking along her beloved spring-powered Coilcycle and a new Gibbs-Farquaharson-Metford rifle, the latter to promote the illusion that she is on safari.

Once on the ground in the British colonial lands, Monot meets famed hunter Frederick Selous (like Rhodes and Terry, a real person) whom she gradually takes as a lover. The two, aided by many loyal native tribespeople, do indeed locate her vampire kin, particularly prevalent among the Bush people, whose leader Xam is convinced of Monot’s good will. All will play a significant role in a violent historical fray known as The First Matabele War. But as the dust settles, Monot is slowly developing opinions of the African indigenous peoples that differ greatly from those of Rhodes or even her cherished Selous.

For those not familiar with the “steampunk” genre, Woods, editor and nature lover, offers a hearty immersion, mixing fantasy and history with vampiric deeds and desires in a setting laden with the latest quirky inventions of that era. Woods, who has published nonfiction in the past, has composed this well-plotted, imaginative work as part of a series. He has penned Monot’s saga with verve, seeing everything from warfare to wardrobe through her eyes – the eyes of a bloodthirsty, erotically attuned yet strangely idealistic young female vampire. It’s clear that the author has done his research carefully, demonstrating an intelligent understanding of the many dynamics at play.

Quill says: Royal Blood is an eerily enjoyable mix of romance, danger, vampire love and lore, 19th century colonialism, and a thoughtful look at Africa – its multi-faceted cultures and the greater aspirations of its people.