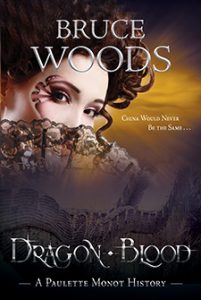 “It is a delightful fantasy look at the Boxer Rebellion, a place and time most readers will be unfamiliar with. Woods handles that very well . . .”

Paulette Monot was still a recently turned member of the Kin, author Bruce Woods’ take on vampires in the late Victorian era, when she arrived in China in the midst of the Boxer Rebellion with the assignment of studying the Boxers and their female auxiliary, the Red Lanterns. After she narrates a battle in the detached and peculiarly formal style in which the novel is written, she aids the healing of one Red Lantern using the powers of the Kin, pulling her deeper into the conflict and attracting the attention of the mysterious creature Huo.

Written as Paulette’s detailed travelogue and mission notes, the novel’s main action occurs within Tientsin and Pekin and on the countryside road between them. Paulette’s maturation as a member of the Kin is her main development over the course of the novel. The imitation-Victorian writing style takes some getting used to but ultimately proves to be part of its charm. It is a delightful fantasy look at the Boxer Rebellion, a place and time most readers will be unfamiliar with. Woods handles that very well, giving exposition as needed and grounding Paulette’s Kin abilities in knowing asides about the era’s disapproval of superstition and embrace of rational, scientific explanation.

Dragon Blood is the second book in Woods’ Hearts of Darkness trilogy, and readers would benefit from reading it in order and not on its own.