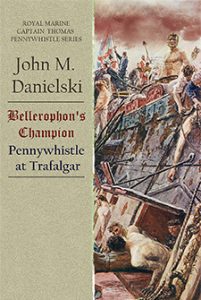 “He [Danielski] makes readers care about the characters, which makes for poignant, gut-wrenching scenes, while at the same time portrays the determination and self-sacrifice the participants willingly made to protect others.”

Distraught over being jilted by her fiancé, Pennywhistle’s beloved cousin kills herself. Thomas, a medical student, misread the signs and blames himself, which is why he intervenes when he witnesses a gentleman thrashing a woman. The cascade of events that follow forever alter his life. Instead of becoming a doctor, he joins the Royal Marines.

Three years later, on 21 October 1805, First Lieutenant Thomas Pennywhistle finds himself aboard HMS Bellerophon, a ship of the line more commonly referred to by her crew as the “Billy Ruffian.” The vessel is one of twenty-seven, approaching Cape Trafalgar and the combined fleets of France and Spain. Before long, the two enemies will engage in the battle Admiral Nelson has long sought. It will pit his ships against thirty-three ships of the line, armed with 2,636 guns and manned by 26,000 men. Nelson’s warships carry only 2,200 guns and 18,400 seamen and marines.

Since his commander suffers from consumption, Thomas is responsible for the men serving under him. He is an excellent marksman and hunter, but has never applied either talent in fighting. The coming conflict will provide the perfect opportunity to test his skills in actual battle. He has also provided some of the crew with sword-fighting instruction, so they might better defend the ship if boarded. The two second lieutenants serving with him are Luke Higgins and Peter Wilson.

Higgins is an Irishman, the youngest officer aboard, and only joined the marines eight weeks earlier. From Thomas’s perspective, Higgins likens “the great conflict ahead [to] a giant version of some schoolyard tussle.” (30) Yet he has the determination and passion to be a hero, and he wants to emulate Pennywhistle, who he sees as an older brother.

Wilson may have gentlemanly manners and a sharp mind, but few trust him. Nor does it help that he’s particularly adept at playing cards and is owed money by many of the officers. Joining the marines wasn’t his preferred option, but it was the only way that he could disappear before becoming embroiled in a legal suit. The last thing he wishes to become is a hero and he’s not particularly keen to stand in harm’s way during the forthcoming battle. Thomas finds him disturbing, and the ring Wilson wears also niggles at Thomas’s memory, but he hasn’t a clue why that might be.

The story unfolds from the perspectives of a variety of characters, including those mentioned above and the Bellerophon’s captain, schoolmaster, several crewmen and marines, the surgeon, and two women – Mary Stevenson, the gunner’s pregnant wife, and Nancy Overton, whose husband is the sailing master. This diversity allows readers to experience the breadth of battle in all its horror and glory. There are also a number of animals aboard, whose antics before, during, and after the battle provide humorous interludes and grim reality that contrasts with the experiences of the men and women.

The battle commences at noon, and the twenty-six chapters depicting it provide more than enough evidence to prove it was a “long and bloody affray,” as one character foresees. But the first fourteen chapters show how each character prepares and what he or she thinks prior to the first shot being fired. These pages may not pass quickly, yet they allow readers to get a feel for the slow passage of time that the participants experience, or as the author writes “the minutes were moving at the pace of crippled turtles traversing fields of molasses” – a passage that vividly describes the battle when the wind slackens as much as it does the long wait for the engagement to begin. (147)

Although this is the fourth Pennywhistle book to be published, it actually takes place prior to the previous books in the series and it explains how Thomas comes to join the Royal Marines. The only drawback to the story is the lack of proofreading. There are too many misspellings, missing words, duplicated words, and misplaced apostrophes to go unnoticed. Yet the author has a gift of crafting phrases that vividly get the point across, as when he compares an amputation to peeling an onion.

Danielski expertly depicts the battle in a way that compels readers to keep reading in spite of the gruesome and brutal realities of war. He makes readers care about the characters, which makes for poignant, gut-wrenching scenes, while at the same time portrays the determination and self-sacrifice the participants willingly made to protect others. He also commendably demonstrates that war cares little for who and what a man is or does. A man might overcome a personal struggle only to be removed from the action without rhyme or reason.