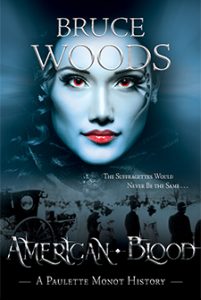 “Bruce Woods’ Hearts of Darkness Trilogy is highly enjoyable escapism. If you’re in need of entertaining fantasy fiction or historical urban fantasy, please take a look at this trilogy, because it’s a compelling read.”

Bruce Woods’ American Blood is the third and final novel in the Hearts of Darkness Trilogy. It’s an excellent sequel to Royal Blood and Dragon Blood, because it’s just as good and entertaining as its predecessors. It’s highly enjoyable escapism to everybody who loves historical urban fantasy.

Because American Blood concludes the Hearts of Darkness Trilogy, this review is in equal parts a look at the whole trilogy as well as a review about the novel itself. I’ll try to keep this review as spoiler-free as possible.

Having had the pleasure of reading the whole trilogy, I can say that what Bruce Woods has created is very entertaining. I enjoy the author’s way of writing about Paulette Monot and her adventures, because he doesn’t resort to clichés and manages to keep the story fresh and intriguing. The author’s writing is wonderfully effortless and fast-paced.

American Blood begins with Paulette residing in Washington, D.C., America. She lives quietly and keeps a low profile until she meets Lucy Burns, who is a young leader in the American movement for Women’s Suffrage. When Paulette rescues Lucy and offers to make a donation for their cause, she is suprised by meeting a woman who can see what she truly is. She learns that there are shades (Souls) who seem to cause trouble to the movement by affecting their opponents’ minds and tries to find out more about them. Soon, she meets her maker, Bryan Card, and is not happy about meeting him, for she knows that he can cause problems…

This is all I’ll write about the story, because I want to avoid revealing major spoilers. I can, however, mention that what I’ve mentioned here serves as the beginning for an exciting and well-executed story that will fascinate fantasy readers with its twists and turns.

I find Paulette Monot an especially intriguing protagonist, because she is a complex, multifaceted and intelligent yet sensual and liberated woman, who is a vampire. She has her own needs and – if needed – she can also be rough and ruthless. I’ve enjoyed reading about her ever since the first novel, because the author writes fascinatingly about her life and thoughts. It’s captivating to read about how she observes what happens around her and how she feels about many things, because she looks at things from a different point of view than mortals.

This novel has many historical elements that are connected to the American movement for Women’s Suffrage. The author uses these elements to his advantage, because they serve as a backbone for the story. He writes well about the suffragettes and their struggle, because he tells of what kind of difficulties they experience while pursuing their goal of getting women the right to vote.

The apperance of Paulette’s maker, Bryan Card, is an interesting part of the story, because Paulette doesn’t think fondly of him and notices that he is capable of causing trouble. It was exciting to read what happens between Paulette and Bryan, because Paulette is appalled and disgusted by Bryan’s deeds and doesn’t want anything to do with him. I think that many readers will be pleasantly surprised by what happens between them and how Paulette takes care of things.

What makes this novel especially fascinating is that the author tells of how Paulette Monot became a vampire. I also want to mention that the shades (Souls) that Paulette is capable of seeing are another essential and interesting part of the story arc. I won’t go into details about them, but I can reveal that their presence and the way they affect people causes Paulette to investigate the reason for their appearance.

I find Bruce Woods’ prose fluent and engaging. He is one of those authors who manage to write stories in an effortless way without resorting to cheap tricks to amuse his readers. He’s an excellent storyteller and his story flows well (I consider his effortlessly flowing story to be one of the reasons why each of the novels in this trilogy works well).

I think that this trilogy will be of interest to readers who love historical adventure stories, historical urban fantasy and vampire stories, because it’s an entertaining and well written trilogy with an emphasis on good storytelling. It also has a few elements of mystery fiction that lend a special touch of entertainment to the whole. Despite having a few dark and slightly unsettling scenes, this trilogy is wonderfully light and thus it will appeal to a wide range of readers.

Before I finish writing this review, I’m compelled to mention that this trilogy is one of the most intriguing historical urban fantasy series I’ve ever come across. There’s something about it that I just can resist, because the author has come up with an interesting protagonist and writes fascinatingly about her adventures in different countries and pays attention to details, not to mention keeps the story on the move all the time.

My final words are: Bruce Woods’ Hearts of Darkness Trilogy is highly enjoyable escapism. If you’re in need of entertaining fantasy fiction or historical urban fantasy, please take a look at this trilogy, because it’s a compelling read.