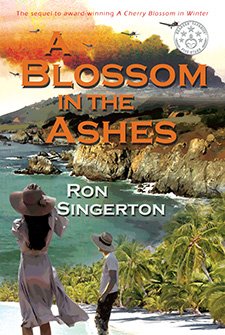 Readers’ Favorite
A Blossom in the Ashes
Reviewed by Mamta Madhavan
June 9, 2020

“The endless complications, the contrasting personalities of the two brothers, the romance between Sayuri and Tad, and the descriptions of World War II make the book a page-turner.”

Set against the backdrop of the tumultuous World War II, A Blossom In The Ashes by Ron Singerton is a love story that throws light on the complexities of relationships that existed during that time, between people and the warring nations. Alexei Kuchenkov and Kimi-San’s two sons, Tadichi and Koizumi, were both fighter pilots. Tad flew planes for the U.S. Navy and Koizumi was a fighter pilot with the Imperial Navy of Japan. Everyone knew Tad’s mother came from ‘the land of the rising sun’ and it was not an easy thing for Tadichi to grow up in California, which was filled with racism because of the Japanese advancement. Alexei and Kimi had moved to California with Tad, leaving Koizumi back in Japan with his uncle Itomo-San because of his frail health. The brothers had not met in a long time and Tadichi missed his brother but they did not have to wait for too long when Koizumi flew to Hawaii to meet his family along with Tad’s old Ikebana Sensei, Mrs. Hiroku Imoto, and her twenty-six-year-old apprentice, Sayuri Saito.

The story not only captures the confusion and destruction caused by the war, but also the emotional bonding of two lovers separated by war, their commitment, and loyalty. The detailed and descriptive narrative makes the scenes come alive, and the conflicts, tensions, and characters have been crafted well. All the characters have been portrayed strongly and each one is memorable in their personality and individuality. The war backdrop creates a sense of urgency, drama, and action while reading, and the angst and the trauma that comes with every war is palpable in the plot. Ron Singerton seamlessly weaves emotions and a love story into the plot and makes it fast-paced and compelling to readers. A Blossom In The Ashes is a good reminder about the hardships caused by war. The endless complications, the contrasting personalities of the two brothers, the romance between Sayuri and Tad, and the descriptions of World War II make the book a page-turner.