BOOK RELEASE: Through Forests and Mountains by Margaret Walker 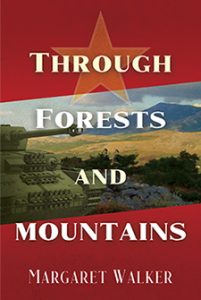 Tucson, AZ, USA — Penmore Press is pleased to announce the release of Through Forests and Mountains by Margaret Walker.

Through Forests and Mountains . Yugoslavia 1942. Anton Marković didn’t believe in a girl with a gun. How could the Partisans win this war with only farmers, labourers and women for soldiers? The experiment was ridiculous. He should have stuck to the ships he knew and not be in a forest in Bosnia with a rifle in his hands, and a bullet in his head, and a woman by his side cackling like a throttled fowl in some dazzling display of hormonal triumph. Tito had allowed the girls from the villages to serve in combat roles, and Mara was all in favour of anything innovative for women. She had just shot her first fascist, and her face beneath Anton’s was exuberant, breathless and beautiful. He was at war, and clearly on more fronts than he anticipated. But could he save Mara from that brilliant and psychotic fascist she could not shoot? From the forests and mountains of Bosnia to the White Cliffs of Dover, the Nazis and the Ustasha battle the most successful resistance movement in Occupied Europe.