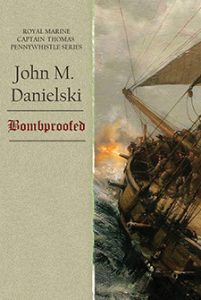 Bombproofed. Royal Marine Captain Thomas Pennywhistle Series. Death limits a man’s future opportunities, but for Royal Marine Major Thomas Pennywhistle, death expands them. After a near death experience, he sees the world with enlightened eyes and enhanced perceptions. He will need them, because he has a code to break, a murder to solve, and spies to outfox. He will be entering a world of international intrigue, confronting a conspiracy to undermine the British monarchy. His capacity for guile, quick thinking, and decisive action have served him well in combat; now he will exercise his talents in the arena of politics.
Pennywhistle has a staunch ally in his resourceful American bride, but Sammie Jo is a fish out of water in Regency England, struggling to find her footing in high society. Marriage is an undiscovered country for both of them. Will they lose their way or trust their hearts’ compass?
From the battlefield grime of Tidewater Maryland to the elegant halls of St. James Palace, Pennywhistle’s courage will be tested, and he will be asked to serve his country in ways that he could never have imagined.