BOOK RELEASE: A Congress of Kings by James Boschert 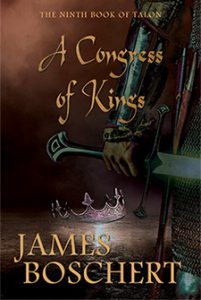 Tucson, AZ, USA — Penmore Press is pleased to announce the release of A Congress of Kings by James Boschert.

A Congress of Kings. Book 9 of the Talon series. The year 1187 is one of the most fateful for the Christian crusades in the Holy Land, and one of the most disastrous. Under the vigilant protection of Lord Talon and his companions, the land of Kantara enjoys peace even as the tyrant Isaac Komnenos continues to plunder the rest of Cyprus. However, dark clouds are gathering and great storms bring with them unwelcome Norman visitors. Soon Talon is embroiled in the invasion of Cyprus, assisting King Richard of England who, en route to Acre for the Third Crusade, must save his royal sister, Queen Joanna, from Isaac’s clutches. Talon is forced to accompany Richard I to the besieged city of Acre—a city which holds painful memories for Talon. There, quarreling kings, men who once were kings, and men who want to be kings form the leadership of the Crusading armies. Their lust for power blinds them to the threat posed by Salah ad Din, the skilled general who fights on the Arab side, continuing the tragedy that started with the terrible defeat at Hattin. And lurking out of sight is yet another implacable foe who prepares his own assassins for a mission of revenge. Talon has eluded the Fidai of The Master Rashid ad Din for nearly twenty years, but his luck may be running out.